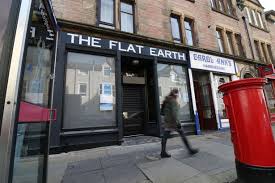 Ah, the Scottish Highlands in spring, what a delight to see the still snow-capped Cairngorms, the sun kissed daffodils around the low roads, and my second granddaughter for the first time. What a surprise also to see The Flat Earth shop in Inverness and all the flat earth graffiti on the surrounding road signs; some people up there seem to take this as seriously as the Loch Ness Monster, and Dour Protestant sects by the bucket load.

Whilst I admire eccentricity and non-conformity, Flat-Earthism does seem rather vulnerable to immediate falsification. You may laugh but remember that almost the entire scientific community still subscribes to Flat Universe theory – the idea that exact Euclidian geometry applies to the whole universe thus giving it an overall zero curvature, a big bang beginning and a catastrophic ending.

You might think that the pervasive superstition of an explosively expanding universe suggests a negative curvature but by miraculous coincidence all the supposed mass within it supplies a positive curvature (gravity) just capable of arresting the supposed expansion given infinite time.

In centuries to come our descendants will laugh at Flat-Universism as heartily as we now laugh at Flat-Earthism. The cracks of its impending falsification have already appeared where you would most expect them – in the ‘crank’ scientific papers written by people such as myself.

The hypothesis of Hypersphere Cosmology for example: -

shows that the universe has an observable positive curvature which we can see in the residual Pioneer deceleration, the retardation of the frequency of light when it traverses cosmic distances, and the diminution of type 1A supernovae luminosity due to cosmic hyperspherical lensing. Moreover, the hypothesis also explains the anomalous galactic rotation curves without dark matter and provides the only scenario in which Mach’s Principle of the origin of inertial mass can apply.

All these parts of the hypothesis come with rigorous supporting mathematics.

Does any of this matter to us tiny humans on this quaint little planet in the suburbs of one unexceptional galaxy among billions?

Well it matters intensely to me because our views of the universe underlie our metaphysics and philosophies and religions and theories of magic, and thus what we believe about reality and thus how we live.

The big bang hypothesis with its big crunch or entropic fade-out ending seems a horrible sort of monotheistic style apocalyptic scenario from which humanity can never escape except to the imaginary transcendental realms of some great sky-fairy or other. This doesn’t encourage people to value this life or to look after this planet.

On the other hand, the Hypersphere Universe has no beginning and no ending, it has finite but unbounded extent in space and time – meaning that you can never fall off the ‘edge(s)’ of it in any dimension. Humanity could survive for effectively unlimited time if it proves clever enough to move to fresh habitats as stellar and galactic events render old ones unusable. Plus, the universe having effectively unlimited age will most certainly contain intelligences far older than our own that may eventually decide that we have become worth communicating with.

Meanwhile the extended Apophenia working on Arcanorium College continues to produce a splendid burst of inspiration and creativity in many fields.

For me it has led to the evolution of the structure of Square Rigger Chess as a sort of distraction activity (soon to appear on the games pages) whilst making some progress with the Quantum Hypersphere hypothesis. It has become clear that the phenomena of individual quanta depend on the phenomenon of the entire universe; as Hermes Trismegistus quipped – As Above, So Below.

Imagine a perfectly spherical planet with no land, just an entire surface of water. Drop a rock into it and circular waves spread out, eventually these waves will converge on the other side of the planet and get higher as the circles get smaller, finally producing a spike in the water as the inverse of the hole in the water that the rock made.

That an antiparticle appears at the antipode may seem a little odd. However, consider this – if you travel to the other side of this planet you end up upside-down with respect to your starting orientation, you have rotated 180 degrees. If instead of simply moving across a slightly curved plane to a terrestrial antipode, a particle moved right across/around the curved hyperspherical universe it would become rotated through all dimensions of space and time to become its mirror image antiparticle.

This all seems to fit in with Milo Woolf's ideas on particles as spherical standing waves, the transactional interpretation of quantum mechanics, and the hypersphere cosmology idea of antipodal particles having opposite matter/antimatter sign.

De Broglie hypothesised that matter quanta have the wave/particle duality that energy quanta exhibit, and indeed we can now demonstrate quantum entanglement, superposition, and tunnelling with matter quanta such as electrons. As the transactional interpretation of quantum mechanics seems the only one capable of providing a physical-principle model for these phenomena then presumably the phenomenon of moving matter particles must also arise as a transaction process in which advanced waves move backwards in time.

Thus, the wave function of any quantum stretches all the way around the universe to its antipode point at about 14 billion light years away.

So, a photon, an electron, a proton, a ball bearing, this planet, you and I, all consist of interreference patterns that manifest as particles out of wave functions that extend right around the entire universe.