3) Production only on systems where a fortress has been planted. Income units can only move across uncontested (connected) pathways of any length. Ships appear in neighbouring uncontested space. Surface unit appear on systems.

B) Ships may fire on surface units in systems adjacent to the space they occupy. Combat occurs at the discretion of the attacking ships.

C)  Ships may convey surface units between any two systems that border the space they occupy. Surface units may only be moved across one space area to another system in a turn. If surface units land on a system occupied by enemy surface units or fortresses Combat occurs.

D) A fortress may land on a system not occupied by enemy forces, and assimilate its carrier.

5) Combat. Risk Protocols. Up to 3Attack dice against 2Defence dice. by combat rounds, highest dice against highest dice, defenders win draws. Casualties at the discretion of each combatant.

6) The number of pieces of each type supplied reflects the limits of units of that type that a civilisation can support.

8) Fortresses. All civilisations start with one immobile Fortress on their largest world, and one fortress in a carrier in a space adjacent to the homeworld. Civilisations may purchase additional Fortresses and Carriers to transport them to other systems. A Fortress only becomes operational when landed on a system empty of opposing assets and its Carrier has become assimilated and removed from the display. Fortresses can only defend and only when not in a Carrier. If attacked in a carrier only the carrier defends.

9) Starting Conditions - Humans. 1 Fortress on homeworld, one next to it in space, all Cruisers, Destroyers, and Frigates deployed at will on any space territories adjacent to at least two home systems.

Reapers equal in number to the production values of all home systems on those systems.

10) Victory Objectives, conquest of as many systems as possible.

2) Income. From any system occupied by a Hive or Scorpion.

3) Production. At any system occupied by a Hive. (If connected)

ALLIANCES. 2 Player. Aliens pick any two allies but not Imperials, by picking an ideology to back. The Imperials then ally with the other two factions. Aliens then set up and move first. Play order then established by lot and proceeds clockwise or anticlockwise by lot. Allied ships but not surface forces may occupy the same areas.

The following chart shows the ideological relationships of the five factions. The Aliens can pretend to any ideology to select a pair of allies. The Imperials will adjust their ideology to suit the allies they become left with.

Production bonuses. Add 1 or 2 to the income value of any system.

Leader and Character pieces can be added to the game to add these powers to any forces on a system or space area. 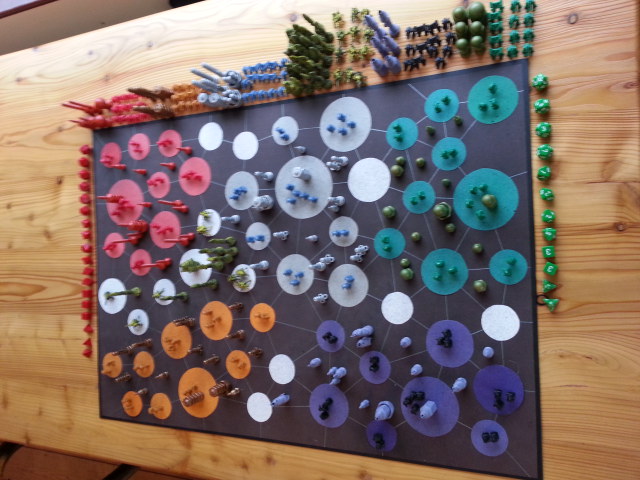 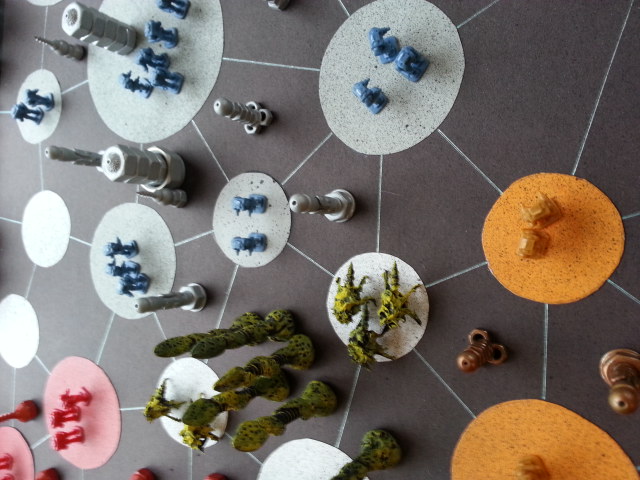