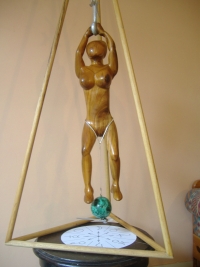 Dismayed by my tree surgeonâ's announcement that one of the ancient cherry trees in my gardens had virtually died, I resolved to immortalise part of it with a sculpture to the goddess Apophenia.

As her sculpture evolved from the wood over many months it seemed that she wanted to climb free of a clunky base and dance, so I resolved to mount her as a mobile.

Then an Apophenia wand that I had posted to Australia finally returned to me having circumnavigated the globe due to a misplaced number 8 on the address, and its incorporation seemed indicated.

Discussions about chaos mathematics and tetrahedrons on Arcanorium College also contributed to the final form of her sculpture which evolved into a lateral thinking and divination oracle shown on the accompanying video.

The chaotic torsion pendulum effect depends on having two linked pendulum weights, the goddess herself and the malachite sphere, with different rotation periods, as one spins it transfers torsion through the wire to the other and vice versa and the movement of the entire device remains hypersensitive to its initial conditions after the manner of the butterfly effect.

The operator takes readings from the various positions of the pointer as it momentarily comes to rest at various points in its spin cycle. This allows for the production of a string of results from a single spin cycle.

The video shows Apophenia set up with an I-Ching disk which gives also moving lines in the correct ratios. She also has disks to generate Binary Numbers, Ouranian-Barbaric words, and combinations of the Eight Colours of Magic.

We reserve these last two functions for private work but we provide a limited amount of free public oracle service by email for any question that interests us, and for which a Binary Number or an I-Ching Hexagram might provide an answer.

Note on Binary Numbers. Leibniz discovered them and most electronic information systems now run on them. All base 10 numbers have binary equivalents, viz: