Herewith The Octavo, by the grace of Apophenia, Ouranos, and all the other ‘real’ and ‘imaginary’ mortals, goddesses, and gods,  who came to aid this project………..

The Octavo wrote itself in an attempt to find some common ground between many of the bits of objective reason and intuitive sorcery floating around in the noosphere and available to this longsuffering scribe who willingly accepted the challenge.

For the last 50 years some mystics and magicians have sought to justify their results and speculations in terms of quantum and cosmological physics, much as they sought to justify such speculations in terms of theological ideas in previous centuries. Unfortunately most of such attempts lacked rigor or much beyond a superficial familiarity with popularizations of advanced physical theories.

We hope that we have finally got it right and that we have shown the maths to demonstrate it.
The Octavo does contain many falsifiable and/or confirmable hypotheses for our delectation. In particular it addresses the scale issue of how quantum and cosmological phenomena may influence the macroscopic realm in which we find ourselves incarnate.
Probably nobody will understand the full implications of The Octavo on a first reading. It took nearly 40 years to assemble this and it may well take some serious study and supplementary investigation to unravel it all. We hope that it constitute an egress into the magical, metaphysical, and scientific ideas of the future.

Hopefully it may keep magicians, philosophers, and scientists arguing and experimenting for some time.
Some may pretend to a superficial understanding, others may deride it as wildly tangential and obtuse to the traditional vision of what should concern magicians. However the hypothesis that only a critical analysis of the metaphysics underlying the theory and practice of magic can lead to progress in either informs this work. Only time will tell if this strategy proves useful.

Any respectable Octavo for any universe should traditionally contain just 8 timeless chapters; nevertheless this Roundworld Edition contains an excusable Zeroth introductory Chapter 0, and also perhaps an inexcusable Chapter (?) ‘The knights of Chaos’, which appears as Appendix 1, in lieu of a Chapter 9. This gives a purely contemporary view of what the wizards of planet earth may need to do in the next couple of decades to ensure that we still have a viable biosphere at this centuries end. Perhaps ‘Nothing has Truth’, but if ‘anything can Happen’, then we should give some thought
See below for the raw equation-spells of The Octavo, a picture of its cover and details of its availability.

Some of these spells relate to controversial cosmological matters and to equally controversial interpretations of quantum physics in terms of three-dimensional time, but each has a direct bearing on magical theory and practice. Plus some relate directly to probability manipulation
considerations in enchantment and divination whilst the last one deals with matters of ‘spirituality’ and ‘enlightenment’ in precise and quantifiable terms, perhaps for the first time ever.
Octarine fire may not immediately blaze from its pages, as would happen in the rather stronger magical field in Discworld, nevertheless careful study may provoke some surprising sparks within some minds.
The Octavo Grimoire itself contains a full explanatory exegesis of these rather terse and formidable looking spell-equations, some practical ritual models, and some fully explicated rituals in its appendices.

Future Stokastic Projects?
Nobody would believe any autobiography, we have difficulty in believing it ourselves, and so we probably won’t bother. We do however intend to continue trying to nudge the next generation of magicians in potentially productive directions, to assist in the production of The Portals of Chaos, a series of multifunctional enchantment, divinatory, evocationary, invocationary and illuminatory tools in graphic form on moveable cards. (Artists, publishers, and some concepts already in place.)

This will not look anything like another mere tarot deck we might add! We do not intend to go loudly into the night with a self aggrandizing autobiography, a tarot, or a final impoverished demise in Hastings (what a dump), like several of our predecessors.
If anything comes up to seriously challenge the hypotheses in The Octavo, like a definitive proof of the existence of the Higg’s boson, super-symmetry particles, an immortal soul, or god, then we shall have much to do in a hurry.

Otherwise our last couple of probable decades of current incarnation seem ideally suited to an exploration of how to make starships using both magical-metaphysical and physical ideas, or to die trying. Okay so that looks like a long-shot against difficult odds, but then again, doesn’t life itself, so why the heck not? 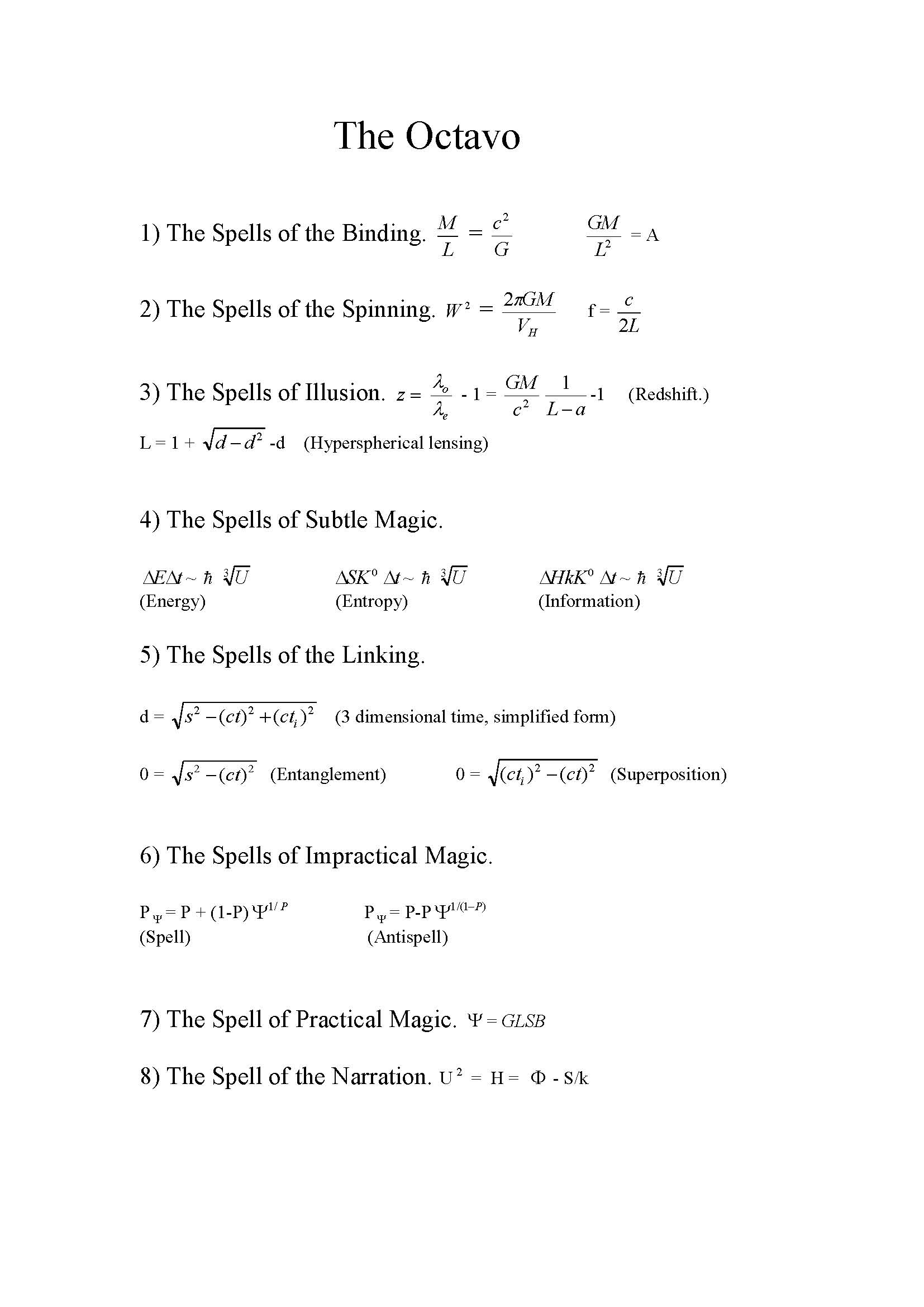