Herewith a recent sci-fi board game system. The board represents space using star systems as nodal points connected by posible jump routes. All movement takes place simultaneously on the declaration of pre-wriiten destinations for starships. Combat between opposing ships that land on the same star system takes place by the simultaneous revealing of ship order of engagement and chosen tactical cards, the effects of which appear on the combat octagon charts. The system does not use dice or other sortilege procedures, everything depends on trying to anticipate an opposing commander's intentions in movement and tactical combat. Does this make it a game of chance or not? 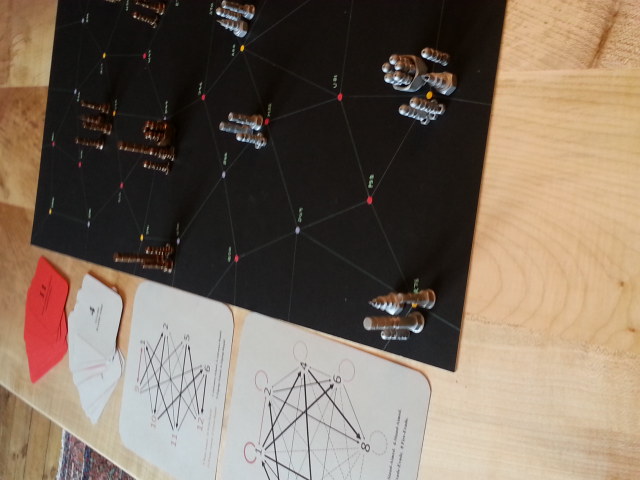 The various classes of starship and the starsystem bases all consist of various nuts and bolts and masonry anchors and plumbing fittings painted matt mettalic. Such pieces have the advantage of standing upright and not cluttering the board, vessels of the same class all have the same appearance, and the pieces have a pleasing weight. Combat takes place only at star systems. Although the system used a 2D board to represent 3D space we can consider the stars as lying both above and below the plane of representation. 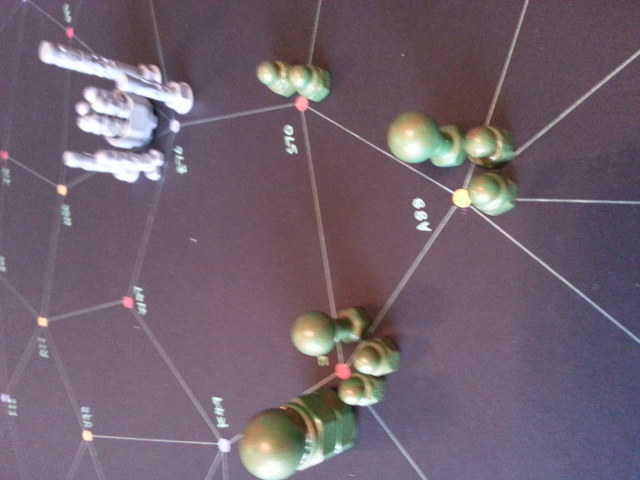 1) Starships in the FSW Universe.

2) Ship Movement in the FSW Universe.

At each turn all ships on all sides can move simultaneously.

All ships that move must move two star systems, slingshotting via an intermediary system at hypervelocity. (The presence of other ships at the intermediary star makes no difference)

Commanders write down the next position of each of the ships under their control on a log-sheet and then all commanders reveal their secret orders and move their ships accordingly.

Here the flotilla starts at star system N36. On successive moves the flotilla splits in two with a pair of Destroyers accompanying the Battleship to D43 and then on to H67, whilst the other Destroyer goes with the Cruiser to X14 and then to L65.

3) Ship Combat in the FSW Universe.

When opposing vessels meet at a star system, combat occurs if any commander elects to attack opposing vessels. Combat proceeds by combat rounds until only the vessels of one side remain, the others having become destroyed or having managed to evade, or all commanders elect not to attack further.

A combat round begins with the Assignment of vessels. Commanders put forward a piece concealed within a hand against an enemy commander who must then put forward a concealed piece and then both reveal them simultaneously, until all attacking ships become paired.

If one side’s ships outnumber that of the other, then the commander(s) of the greater number may then assign any spare ships to join in where desired.

Combat rounds then take place between vessels assigned against each other. Each commander selects a tactical card for a vessel and puts it forward, both commanders then reveal their tactics and consult the tactical chart to assess the result.

Where more than one vessel becomes assigned to attack a single vessel the commander(s) of the multiple vessels may order them to attack individually and put forward a concealed tactical card for each. In this case commanders assess the effects of each of these chosen tactics against the single tactic chosen for the single vessel. Alternatively, the commander of the multiple vessels may coordinate Destroyers or Frigates with other vessels (subject to certain restrictions below) and chose a single tactic for them.

Ships coordinated together on a single tactic simply pool their firepower and defences and act in effect as a single more powerful vessel.

Restrictions on the grouping of Destroyers or Frigates arise from the telemetry problems associated with closely coordinating their actions:

a) A single Destroyer or Frigate can coordinate with a heavier vessel such as a Cruiser or a Battleship or a Jump Carrier or a Factory.

b) Two Destroyers or Frigates can coordinate with each other.

If adding the arrow score to the firepower of the ship that scored the hit gives a number higher than the defence value of the target, the target ship becomes destroyed. In the unforgiving environment of space, shield and generator breaches invariably prove fatal.

Dotted lines show that a vessel which has chosen tactic 7 or 8 has achieved an evasion. To achieve an evasion against multiple opposing ships, a ship must evade them all.

When Ships attack Factories based on planets, commanders use Combat Octagon 2 in which they have fewer tactical options.

When a Factory comes under attack, commanders treat the Factory in the same way as a Ship for the purposes of Assignment. If all defending Ships have become destroyed or have managed to evade, the attacking commander may simply declare an evasion of remaining attacking Ships if an attack no longer appears worthwhile.

After the resolution of all combats, another turn begins, and commanders write new movement destinations for all the Ships they wish to move.

Thus, a complete turn consists of the following three phases.

a) Spending of Ship Units to create Ships which appear at the Factory.

e) Production of Ship Units at Manufactories which lie on planets and have not moved during the turn. (Only one Manufactory can operate at any Planet.)

4) General Notes on Scenarios, Strategy, and Tactics in the FSW Universe.

a) The FSW system uses Topological Nodal Mapping of the contested areas of space. Points on the map denote star systems. Yellow points or markers show stars with inhabitable rocky worlds in an appropriate temperature range. Blue and Red points show stars which do not have such planets, Ships can go to such systems or slingshot past them whilst jumping but they cannot establish bases there. In most areas of space, uninhabitable star systems outnumber habitable ones by about five to one. Lines joining star systems show those within navigational range of each other and hence the possible ‘jump routes’.

Two dimensional representations of contested areas (with the stars and jump routes understood as projecting both above and below of the plane of representation and with some jump routes thus perhaps appearing to cross each other) prove most convenient. The scale of the map in relation to the sizes of the pieces should allow for the unambiguous positioning of groups of pieces around any star system.

To settle larger battles at star systems commanders may temporarily move all involved pieces off board to a convenient space and then replace the surviving ones on the board afterwards.

In Tournament Scenarios both or all commanders start with equal forces on a board with an appropriate (if somewhat unrealistic) symmetry, and the contest continues until one side achieves set victory conditions such as the elimination of all enemy Factories or Ships or the establishment of a set number of new Factories.

Initial set ups and dispositions should ensure the dispersal of forces between well separated Bases to avoid excessive force concentration and cataclysmic battles too early in the scenario.

Empire Building. Players start with some Factories placed and strive to expand their spheres of influence. Alliances may form and break.

Raids. An empire can over-extend itself by providing insufficient protection to peripheral areas or to areas where it has started to establish new Factories. This may offer opportunities for cost effective raids by smaller vessels against areas defended by too few heavier vessels. Deep Penetration Raids against Factories designated as politically important can also justify the commitment of heavy warships.

Convoy Operations can involve moving Factories or designated warships carrying items of great value from one side of an area to another against enemy interdiction.

Insurrection Scenarios can arise after cyber-warfare and/or political propaganda causes some Factories and Ships to rebel and fight for independence.

Tactical Notes. Jump Carriers enter combat with their Frigates already launched. Thus, a fully loaded Jump Carrier could in some circumstances engage several opposing ships by effectively reconfiguring itself as (3+1), (1+1), (1+1). Alternatively, the Jump Carrier could attempt to evade carrying its Frigates.

The civilisations from which fleets originate may not wish to allow commanders to become too powerful and may limit the number of replacements and reinforcements they can build.

5) Diplomacy and Treachery in the FSW Universe.

Scenarios involving more than two players provide opportunities for the making and breaking of alliances.

The simultaneous movement of ships requires trust between allies, and treachery can exploit this.

During a multi-player battle of several combat rounds, ships can change allegiances.

Diplomacy can proceed openly and/or by the passing of private notes.

The complexity of FSW lies above that of ‘family game’ but below that of ‘afficionado game’. However, game aficionados can easily complicate to game to any required degree of sophistication by adding house rules.

Whilst a two player game becomes a straight conflict based on bluff and an asymmetric rock-paper-stone type combat, multiplayer games tend to also involve elements of Diplomacy and Poker.

The rules do not forbid the use of psychic powers. 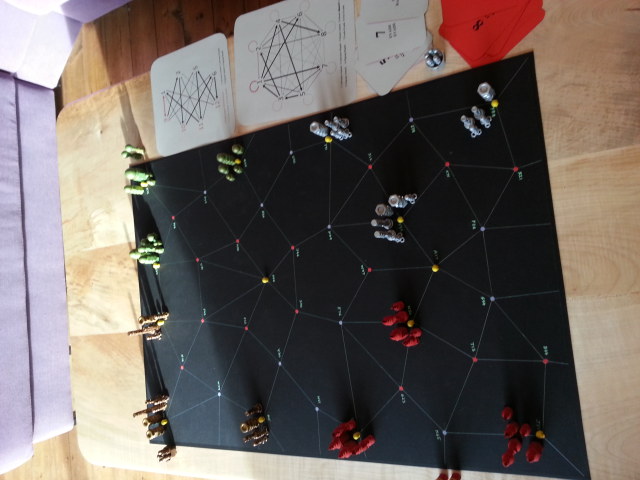 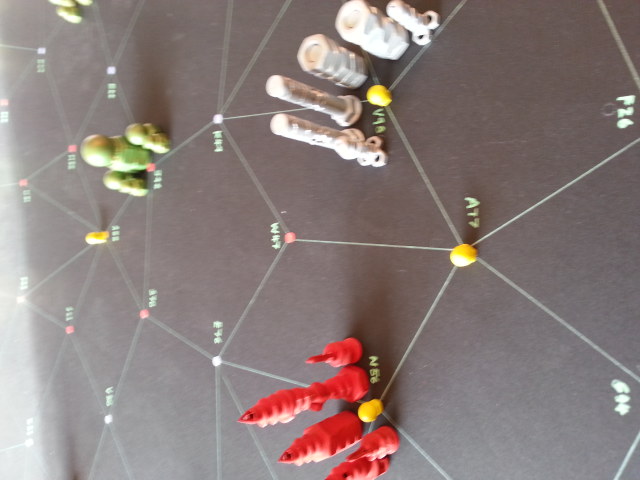