One might have expected the nation that gifted the world the Kalashnikov and the rocket propelled grenade would have realised that the military balance currently heavily favours the defensive rather than the offensive, particularly if the defenders have strong motivation, good communications kit, hand portable anti-aircraft weapons, foreign support, and cities or broken terrain to work from. Have the lessons of Afghanistan not been learned?

So why has Putin invaded Ukraine with inadequate forces to hold it?

Either Putin has become deluded and will go down in history as the last Czar after losing this war, or he has some other concealed stratagem in mind. Remember that he used to play geopolitical chess viciously but logically.

KoC recommendation: - conjure for Putin’s closest people to turn against him.

<Following positive feedback - This following message released for circulation by any available means.>

Definitions of Magic. Some thoughts from a recent academic exchange: -

‘The science and art of causing change in conformity with will.’

Dion Fortune defined it as: -

‘The science and art of causing changes in consciousness in conformity with will.’

I have increasingly come to regard or define Magic as: -

'The Use of Imaginary Concepts to Create Real Effects.’

I define it thus because ‘will’ seems merely a product of imagination. Summoning so called ‘willpower’ or motivation fundamentally depends on engaging the imagination or adopting the products of someone else’s imagination. To restrict Magic to merely ‘changing consciousness’ limits it to psychology and mysticism whilst ignoring its parapsychological potential for direct interface with physical reality.

Such a broad description as 'The Use of Imaginary Concepts to Create Real Effects’, implies that both religion and science also rely on a certain amount of magic. Religions depend almost entirely on imaginary concepts and a lot of the concepts in science seem more epistemological than ontological. Plus of course a great deal of what goes on in politics, art,  advertising, romance, and the other arts of persuasion also depend on the use of imaginary concepts.

In chaos magic we openly acknowledge that 'gods' and 'spirits' exist as imaginary concepts that we create and invoke to create real effects in ourselves and in the world. The blasphemy gets worse, self and identity also consist of largely imaginary concepts as well.

Numerology often gets a bad press from the righteously rationalistic, and probably for good reason, numbers have no innate metaphysical properties in themselves. Yet numbers can show the relationships between phenomena, and indeed a considerable amount of highly reliable ‘straight’ science developed from numerological analysis; corelation does not prove causation, but it can often reveal it.

Kepler’s third law of planetary motion, the purely phenomenological observation that ‘The ratio of the square of an object's orbital period with the cube of the semi-major axis of its orbit is the same for all objects orbiting the same primary’, eventually led Newton towards a more mechanistic description of planetary motion, which Einstein later improved upon.

The Dirac large number hypothesis: the purely phenomenological observation that the vast numbers 1040, (1040)3/2, (1040)2 and (1040)3 all seem to relate quantum scale phenomena to cosmological phenomena, appears as either a fantastical coincidence at this particular epoch of the universe, or as strongly suggestive of a universe hyperspherical in space and time.

Numerical ‘coincidences’ always seem worth investigating, but only if they also have ‘Dimensional Equivalence’, herein lies the weakness of numerology as a system of divination.

Numbers, the letters of the alphabet, dates of birth, and favourable or unfavourable events, do not really equate with each other, such equations do not make any more sense than asking how many seconds make a kilogram.

Algebra on the other hand demands that both sides of an equation relate to the same stuff. Newton’s celebrated force = mass times acceleration has the same ‘dimensions’ of mass times length divided by time squared on each side and Einstein’s awesome E = mc2 has ml2t-2 on both sides. So, does this mean that any dimensionally equivalent equation accurately reflects reality? No, the numerical arithmetic must work as well, and even then, we need further reality checks. However, the technique of  seeking algebraic coincidences does offer a powerful form of ‘divination’ into how the universe works. Such Algebrology suggested many of the relationships in Hypersphere Cosmology, and the arithmetic seems to work within the limits of observational measurement, but it remains open to confirmation or falsification.

Herewith another item of Algebrology, this time in the quantum domain, if we give quanta the theoretical size assigned to them by Einstein Cartan theory and the intrinsic rotation theoretically assigned to all matter by Godel, we can recover the easily measurable Planck-Einstein relationship E = hf. An interesting coincidence or something more?

The Hellgate Chronicles. Have arrived! 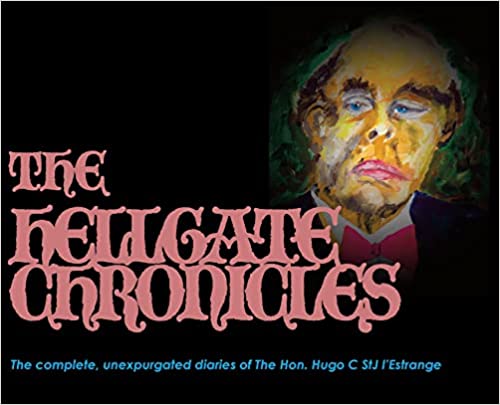 His satirical spoof "The Satanist's Diary" was published as a regular column in The Aquarian Arrow between 1978 and 1992. It won many friends and admirers for its wry comments on human nature, the occult, New Age, and current affairs.

This is the first full collected addition. It includes some previously unpublished material plus colour illustrations and an appendix by Lionel Snell.’ –

- as it says on the Amazon and the Barnes and Noble sites advertising it.

I finally grasp this long awaited hellish tome in my withered old claws and cackle hideously over its ghastly existential paradoxes and vicious social commentary. Any mortal that suspects an evil satanic conspiracy runs the world will run screaming from the unspeakable revelations within its pages. I have to say that I’m enjoying it immensely and rationing it out to myself at a couple of Hugo’s articles per day. This richly hilarious fare was written to be devoured in instalments, and the entire collection seems best read in a similar way. A fuller review will thus follow in the next blog here.