The CMBR consists of electromagnetic microwave radiation that peaks at a frequency corresponding to blackbody radiation with a temperature of 2.70  Kelvin above absolute zero. It comes to observers here from all directions in space.

Standard cosmology interprets the CMBR as relic radiation leftover from a primeval fireball about a third of a million years into the supposed expansion of the universe from a spacetime singularity or near singularity. At this time the universe had supposedly expanded to a radius of a third of a million light years and cooled to a temperature of about 3,000K, at which point it deionised from a proton-electron plasma and allowed photons to pass freely through it. Such photons which allegedly had very high energies and short wavelengths, subsequently became much lower energy longer wavelength photons due to the expansion of space and they now appear to us as the microwave background radiation.

We cannot see the CMBR with the naked eye, but if we could the night sky would not appear dark between the stars because about 400 CMBR photons per square centimetre per second impinge from all directions, they represent a significant cosmic phenomena that demands an explanation.

In Hypersphere Cosmology, all the electromagnetic radiation that does not become absorbed on its journey will eventually return towards its point of origin after about 13 billion years but in a much redshifted form due to gravitational redshifting and lensing by the small positive spacetime curvature of the entire universe.

Cosmologists estimate that our galaxy, the Milky Way, has an age alarmingly close to the supposed age of the universe itself, somewhere around the thirteen billion year mark. They remain adamant that it cannot possibly have an age greater than their estimate of the age of the universe. Yet the Milky Way contains the so-called Methuselah star (HD 140283), whose apparent longevity does seem to severely challenge the cosmic age limit.

The average surface temperatures of all the billions of stars in a galaxy or a galactic cluster adds up to something resembling a blackbody radiation source at about 3,000K when seen from a cosmic distance.

Thus, the CMBR we observe in this region of the hyperspherical cosmos may well have originated from this region and reconverged back here in highly redshifted form thirteen billion years later. Observers in a deep intergalactic void may not observe any CMBR at all.

The following two diagrams show the combined effects of Hyperspherical Lensing and Hyperspherical Vorticitation. Hyperspherical Lensing brings electromagnetic radiation to a focus at the antipode point to its emission. Hyperspherical Vorticitation moves the source of emission to its antipode point in the same period. The first diagram shows this effect in the reduced dimension surface of a sphere representation of a hypersphere, and the second shows it in the reduced dimension ‘two-ball’ representation of a hypersphere. Thick arrows represent the movement of the source due to vorticitation; thin arrows represent the paths of emitted radiation.

Hyperspherical vorticitation will send this galaxy to its antipode point in the universe in a period of 13 billion years. Light emitted from this galaxy will also travel to the same antipode point in the same period and appear as incoming light. The galaxy travels in just one direction, the light travels in every direction. The incoming light will appear highly redshifted from stellar surface temperatures to 2.70 K.

Hyperspherical lensing will make the incoming light appear to have come from a surrounding sphere with a diameter very much larger than the antipode distance but compressed into a smaller field of view and thus multiply imaged. This will effectively smear out temperature variations and absorption and emission lines to yield a CMBR with blackbody radiation characteristics as shown below. 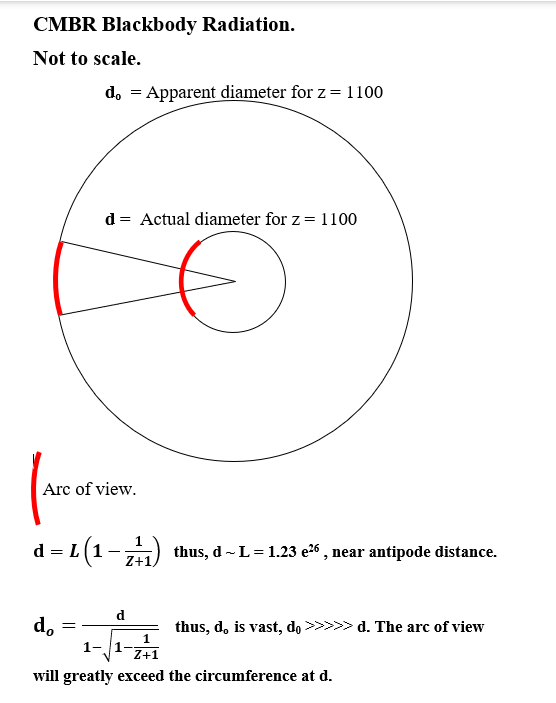 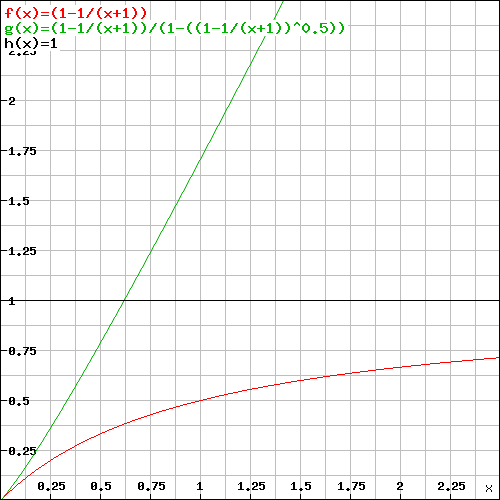 Note that the Apparent Distance of a Redshift = 0.625 source gives an almost exact figure for the Antipode Distance of the universe.