Herewith a simple way to represent quantum effects in a game of chess by the addition of a small number of additional rules.

All the normal rules of chess apply and in addition: -

2) Whenever a half piece interacts with an opposing piece, either by taking it or being taken by it, the other half of it instantly re-joins it, and both halves then occupy the position of the taken piece or both halves become eliminated if one of them gets taken.

3) A Player moving a half piece must also move its corresponding other half.

4) Halved pieces occupy squares and block movement and support and threaten other pieces in the same way as whole pieces.

These four rules lead to a challenging but playable game that has many intriguing properties.

At the end of a game, a record of the game that does not include the moves of all the half-pieces that ‘disappeared’ because their corresponding half interacted, will still look like a standard game of chess although some of the moves may appear as legal but as very strange choices.

The following picture shows a representation of Quantum Chess in the early stages of a game, using doubled pieces rather than pieces sawn in half. (The numbers on some of the pieces make it easier to remember which pieces go together.) 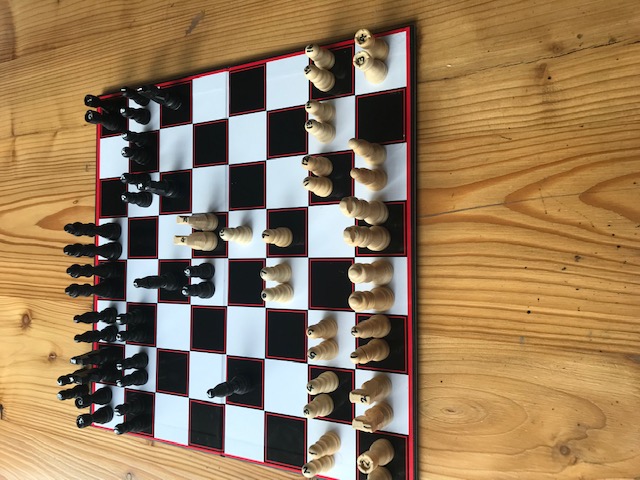 White has taken the Black Kings Pawn with Kings Knight.

Black has replied by moving its Kings Bishop to two possible places simultaneously, one possibility puts White’s King in check, the other possibility threatens White’s Knight.

White now has a quantum problem. White must take its King out of check by either moving it or by moving its Queen or Queen’s Bishop to block, or its Queen’s Bishop Pawn to both block and threaten the ‘possible presence’ of the Black Bishop.

Black has effectively used a quantum trick to threaten two pieces at once with two possible presences of its Bishop and then taken the White Knight. The result of this manoeuvre looks like a legal move in ordinary (particle) chess, but White’s failure to  protect its Knight remains inexplicable if the match record does not include the possible wavelike moves that later disappeared.

Imaginary phenomena can have real effects. 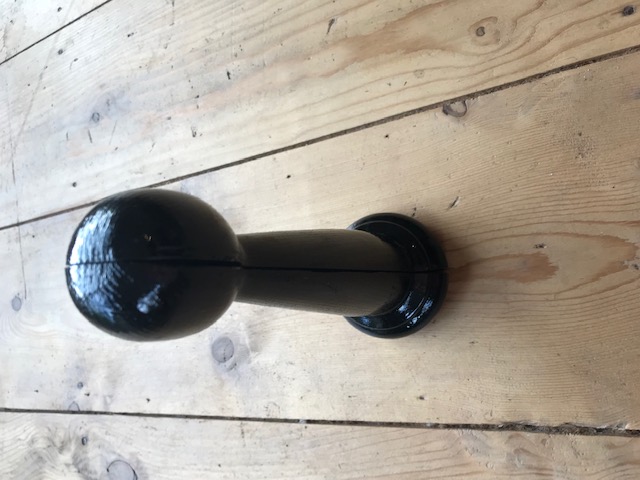 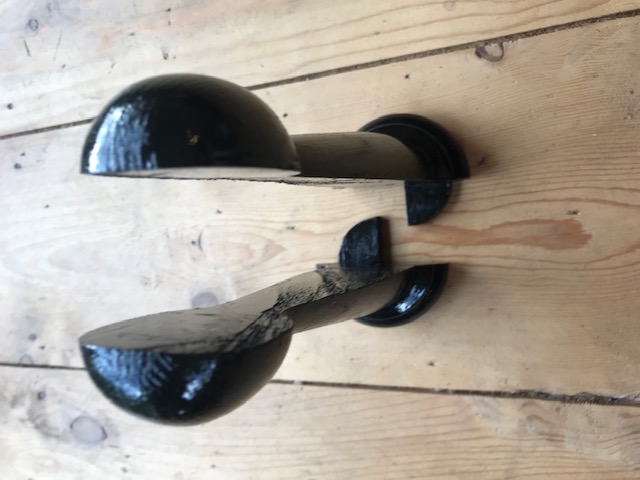 Note the cunning base design which gives extra stability to each of the two halves and helps to secure them together.

Handmade from an ornamental curtain rail endpiece, a length of 2x2 inch softwood, and a disc cut from a length of batten, it took hours with chisels and files, followed by a delicate sawing in half. I don’t have a lathe. I doubt that I’ll try making the other 31 pieces this way.

If anyone wants to manufacture these in say plastic, please let me know, the pawns, rooks, queens, and kings would only require one mould each to this design as they have rotational symmetry about their long axes, the bishops and knights would probably require two moulds for each complete piece.

There follows some general musing on the physics/metaphysics of Quantum Chess: -

Probability – the two halves of each piece represent, in some sense, the probability of its presence on a particular square.

‘Quantum Entanglement’ – the two halves of each piece remain instantly linked over any distance by rule 2 which states that whenever one of them interacts with another piece by taking it or becoming taken by it, then the other half of it undergoes a ‘Wave Function Collapse’ and instantly re-joins the interacting half.

‘Quantum Superposition’ – we can regard the two halves of a piece as representing a quantum superposition when they occupy the same square.

‘Quantum Ontology’ – this model offers as many questions as answers about the reality underlying quantum phenomena: -

Does a piece in wave mode ‘really’ exist in the same way as a piece in particle mode? The wave modes can undoubtedly influence the progress of play, but we can still create a record of the game that does not include them or break the rules of ordinary ‘particle chess’.

Does the wave function collapse of an interacting piece look remarkably like retroactive causation?

If each particle piece can do two different things at once by splitting into two wave modes, does this imply Multidimensional Time?

Technical notes on play -  the rigorous application of the standard rules of chess plus the additional quantum chess rules, only allows pawn particles to split into waves on their first move when they can move one and two squares forward simultaneously. There seems no reason to forbid a player moving the two wave components of a particle piece to the same square to recreate a single particle piece, but this will rarely prove advantageous.

Checkmate and ending the game – Placing the opposing whole King in checkmate wins the game and so does placing either half of an opposing King. Note that a player with half a King in apparent checkmate may have the option of taking an opposing piece with its other half thus evading checkmate. At the end of a game players can elect to collapse any remaining wave positions by moving either one of two halves of the same piece to a square occupied by one of them, but the two halves of a halved checkmated King must move to the square in which checkmate occurred. This restores the semblance of an ordinary game of standard chess.