The current excitement about a possible ‘fifth force’ responsible for the anomaly detected in the spin of the Muon particle may arise from a small interaction with the field associated with the X17 Boson.

The X17 boson remains unconfirmed but suspected from observations of the decay of Beryllium 8 where a putative boson of about 17 MeV decays to an electron and a positron.

In terms of the model under construction at the Physics Department of Arcanorium College this new boson would have the following configuration: - 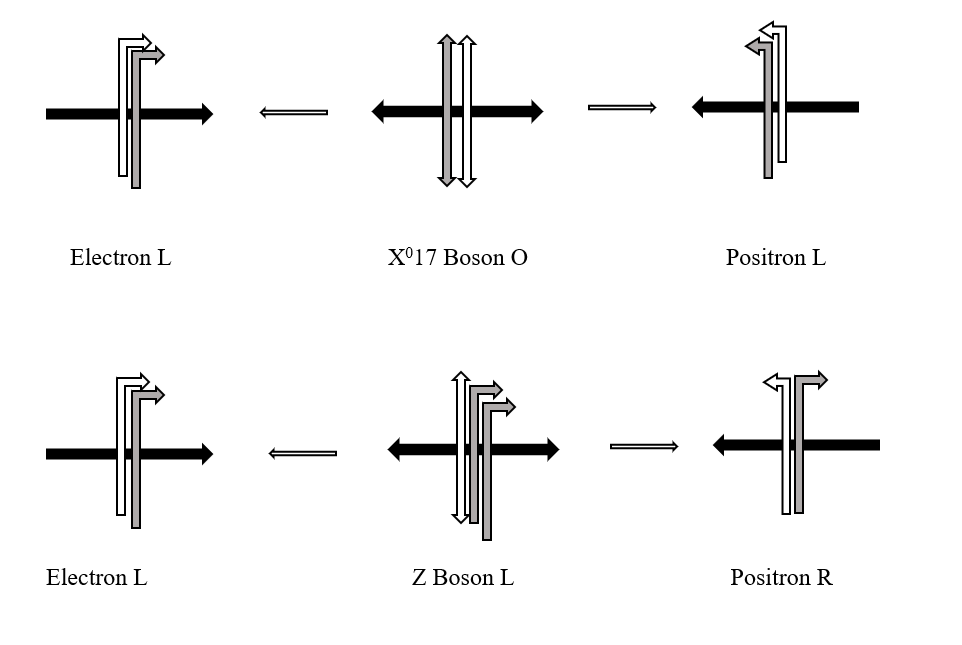 In this model the X17 has chiral spin 0 and electric spin 0, and like all bosons it has a particle/antiparticle configuration, (Transactional Interpretation of Quantum Mechanics). As such it does not really represent a new fundamental force but rather another member of the electroweak bosons, W-, W+, and Z. In effect it consists of a Z boson with both of its half integer chiral spins (grey) going in opposite directions to yield no overall spin.

The horizontal lines represent the spin along the wz axis where z corresponds to the direction of propagation. This model uses the idea of electron bi-spinors generated by non-isoclinic double rotations in four spatial dimensions.

Does this matter? In practical terms probably not, this rare particle seems to play only a miniscule role in the behaviour of reality, however in theoretical terms it may lend some support to hyperspherical models of quanta in extra dimensions, and perhaps eventually to a fuller understanding of exoteric and esoteric aspects of the universe.

We have just had multiple elections in the UK, both for the Scottish and Welsh assemblies that have self-designated themselves as the ‘Governments’ of their respective ‘Nations’, plus a large swathe of local government elections and a Parliamentary by-election for one seat.

The English and Scottish wings of the Labour party have performed disastrously enough to raise existential questions about the Labour party. It has lost touch with its robustly illiberal working-class roots and become the preserve of metropolitan champagne socialists and ‘woke’ activists trying to make a power base by starting culture wars and stirring up grievances.

Personally, I have always cheered on Jeremy Corbyn and Kier Starmer, they seem perfectly suited to leading the opposition.

That the Labour party did well enough in Wales comes as no surprise. Over forty percent of the Welsh work for the state in this subsidised region and the Welsh Labour leader, a verbose and reassuringly avuncular old owl, managed to get himself on television just about every day throughout the covid crisis. The Welsh nationalist party did not do well. A majority of the Welsh supported Brexit and can see no point in refusing English generosity and getting into bed with the failing superstate of the EU.

The results from Scotland give cause for deep concern.

The Scottish Nationalist leader shared the same advantage as the Welsh leader during covid and made the most of her daily television appearances. This compensated for the votes she will undoubtedly have lost over her mishandling of the crisis surrounding her predecessor. It seems unbelievable that she did not know about his behaviour for years and bit her tongue for the sake of her own career until the time seemed right to turn on him. Mischievously lowering the voting age to 16 also helped to bolster the nationalist vote. Mature voters in Scotland tend to favour continued union.

Four percent of the population of the UK now apparently want to leave the UK taking thirty two percent of its territory and none of its national debt with them. That four percent represents only half of Scotland’s population, the other half do not wish to be deprived of British citizenship.

This sounds like a recipe for a Northern Ireland situation……….

The leader of the Scottish Nationalists plays an extremely dangerous and divisive game to advance her political career.

Seven hundred thousand people from Scotland live and/or work in the rest of the UK, and many more have family ties across the presently non-existent border. All concerned should get a vote in the unlikely event that the economically, politically, and geopolitically illiterate scheme for Scotland leaving the UK and joining the EU ever gets put to a referendum.

At present every British citizen has the right to live and work in Scotland and to identify themselves as Scottish. The UK government should make it clear from the outset that these rights cannot be given away without a referendum that involves all British citizens.

I regard Ross shire, Sussex, Inverness shire, Somerset, and Gower as all part of my country, non-negotiable, and worth fighting for if necessary.

All political careers end in failure. Nicola Sturgeon would end up with her head on a pike after the implosion of an unviable Scottish state. The best she can hope for is to extract ever more subsidies and autonomy from Westminster and to eventually retire quietly to some beautiful part of a Scotland that stays British and free of Brussels.