We invite the Particle Physics Police to falsify the following hypothesis before our Geometric Algebraists endeavour to take it any further.

It may form part of the forthcoming Occultaris, a Natural Philosophical investigation of the Macrocosm and the Microcosm.

The conventional Standard Model of Particle Physics and the accompanying (Standard?) Copenhagen Interpretation of Quantum Mechanics plainly remain incomplete models of the Microcosm that do not penetrate to the bottom level of reality.

Hypersphere Mechanics models both particle Physics and Quantum Physics exclusively in terms of the same dynamical Spacetime Geometry that describes the Macrocosm in Hypersphere Cosmology.

Conventional Quantum Mechanics models the nuclear force as having a threefold symmetry whilst using twofold symmetries for particle spins, electromagnetic charges, and particle generations. Hypersphere Mechanics uses twofold symmetries throughout, and it equates all four particle properties to spinorial rotations of four planes in eight-dimensional spacetime.

Hypersphere Cosmology explains the Universe in terms of a Vorticitating Hypersphere consisting of curved 3D space in time and speculates that time may also have a hyperspherical geometry.

A Hyperspherical universe finite but unbounded (closed) in both space and time, also implies curved time.

If the universe exists as a hypersphere in both space and time, then it has 8 dimensions.

(a 3D spatial ball has only one rotation plane, trying to rotate a rotating ball about another plane merely changes the rotation plane to one at a different angle as per the quaternion rules.)

A four-dimensional object such as a hypercube can have two independent rotation planes, the Clifford Double Rotations, such as wz and xy, or indeed any two rotation planes such as wx and yz.

A ‘quantum of spacetime’ can rotate in 8 dimensions and it can have 4 independent rotation planes: -

In hyperspherical Spacetime of w xy z space, and of a bc d time,

a denotes temporal curvature (as a magnitude component in the vector representation); d denotes particles direction of temporal travel.

If we regard the curvatures w and a as unobservable and the directions z and d as observer dependent, then we can denote the 4 spin planes as: - wz,  xy,  ad,  bc.

As spins have quantisation then perhaps, we can expect spins like +xy, -xy, +2xy, etc.

All planes rotate Spinorially - their rotation puts a twist in the surrounding space or time which untwists with a full 7200 rotation. Such twists create attractive or repulsive fields, and spacetime itself.

Particles and their component spins.

± denotes plus or minus

≠ denotes plus and minus, spins of the double component Bosons which cancel each other but which nevertheless carry energy.

Fermions. All with chiral spin ±1xy. (±½) in conventional notation). All antiparticles have reversed spins.

Bosons. All with chiral spin of 0 or 2 (2=1 in conventional notation.)

All bosons have a ‘particle-antiparticle’ nature.

The Graviton thus consist of a zero-spin neutrino-antineutrino pair. The Z boson consists of an electron-antielectron pair with aligned chiral spins. The W bosons as electron-antineutrino or antineutron-neutrino configurations with aligned chiral spins. The component parts of Gluons, and Photons, do not exist independently. Mesons consist of various uni-quark baryon/anti-uni-quark anti-baryon pairs and come in many forms.

Bosons that do not displace wz time, remain free from the Pauli Exclusion principle, allowing them to form unlimited fluxes

Chiral spin and generational spin can interconvert with orbital angular momentum or velocity, and hence do not invariably conserve.

Nuclear Charge has a twofold symmetry not a threefold symmetry. It exists in ± form, not in a threefold colour/anti-colour form. Protons and Neutrons exist as fundamental uni-quark fermions. The Proton carries nuclear charge and electric charge, the neutron carries nuclear charge but no electric charge. At a stroke this removes the idea of fractional electric charges and all the complex confusion of QCD, (Quantum Chromodynamics). Mesons still consist of all the quark/anti-quark pairs as in conventional theory. Moreover, it makes everything consistent with the overall twofold symmetry implied by simple ± plane rotations. The +ad+wz or -ad-wz nature of quarks may represent another Weyl Spinor, or it may result from alignment of spatial and temporal directions of travel.

Mesons have an overall angular momentum composed of the intrinsic angular moment of the quark-antiquark pair, ±2xy (=±1) or ≠xy (=0) plus the quantised orbital angular momentum of the two quarks around each other (denoted above as n&) of ±1,2,3 etc, to yield integer spins.

Baryons as uni-quarks have an overall angular momentum composed of the intrinsic angular momentum of the quark ±xy (=±½) plus a quantised rotational non-spinorial momentum (denoted above as n&) of ±1,2,3 etc, to yield half integer spins of ± 1//2, 3/2, 5/2, etc. The resulting degrees of freedom allow many possible varieties of distinguishable baryon particle, although only the Proton exhibits long term stability.

Early measurements of spin 3/2 Baryons played a large part in the erroneous attribution of a threefold symmetry to the nuclear charge and a tri-quark nature to the Baryons.

In general, the greater the number of spins a particle possesses the greater the energy it carries and hence the more mass and the lower stability that it exhibits, although the spins do not summate in a simple way to yield a simple algorithm for predicting masses. Chiral Spins as high as 5/2 or 7/2 seem indicated for some exotic baryon resonances. Particle generations beyond 3 do not seem forbidden by anything except huge energy requirements.

In the Hadron realm of Baryons and Mesons, a sort of Nuclear Chaos seems to reign - a sufficient concentration of energy can probably produce any imaginable type of particle, but with a lifetime inversely proportional to its mass.

Quantum Chromodynamics, the theory that quarks come in three ‘colours’ and that anti-quarks come in three corresponding  anti-colours and that Baryons such as the Proton and Neutron consist of quark triplets, appears as an unnecessary complication that obstructs our understanding. It arose as a scheme for ordering the massively confusing array of Baryons and Mesons observed in high energy particle collisions, but such a model brings with it a whole slew of ad-hoc fixes. In the QCD model, quarks suffer from ‘quark-confinement’ which prevents them from ever appearing in single form, they also suffer from Asymptotic Freedom in which forces become weaker at short distances and stronger at long distances. Gluons have to come in eight different colour combinations to explain the forces inside atomic nuclei, and quarks have to subtend very complicated arrangements of virtual quarks and gluons around themselves to explain the enormous discrepancies between the theoretically predicted and the measured masses of various quark combinations. These ad-hoc fixes seem little better than the now discarded hypotheses of epicycles and phlogiston.

The proton represents the simplest and only stable particle with all four spins, it has the SNEG signature ½ 111. The Neutron consists of ½ 101. Other unstable Baryons can have higher numbers in their signatures. Suitable choices of SNEG signatures can model all observed Baryons and Mesons and their decay products.

And on a lighter note the Lithonians now have a Fleet Carrier. Fortuitously a larger block of ceramic insulation material washed up on the shore of this lockdown hideaway. The Lithonians come from a metal poor planet and use a lot of stone in their starships and the detritus on this beach seems rather metal poor as well. Discarded vape accessories make up most of the metallic components of the vessels. 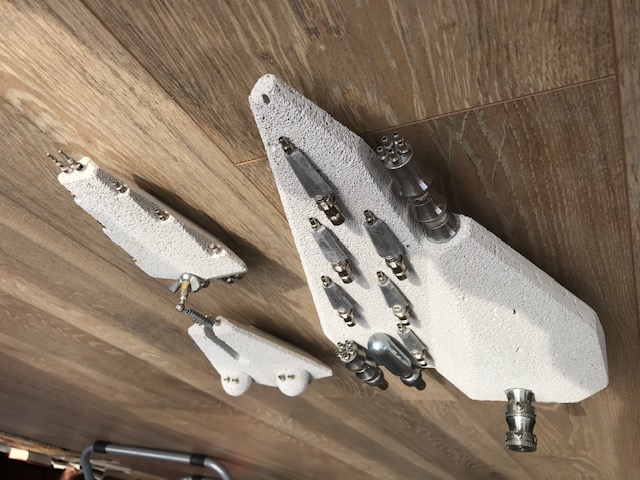 Read 6080 times Last modified on Saturday, 19 September 2020 19:42
More in this category: « The voyage of the Leif Erickson and the Garuda Octoblog »
back to top
feed