Eight years have elapsed since my last book. Correspondents and publishers have started to ask if I have anything else in the pipeline. I most certainly do, although I wonder if the world can or will entertain its exceptionally challenging hypotheses. Herewith the provisional introduction and contents.

The Occultaris. Magic and Natural Philosophy.

Natural Philosophy used to mean the investigation of the natural universe and all its secrets by any means possible. It used to include anything natural that we could observe from mechanical, celestial, biological, medical, to even apparently ‘occult’ phenomena.

The great quest of Natural Philosophy lasted from classical antiquity until modern times and its remit included the study of all things, although it tended to avoid the pitfalls of applying reason to Theology and Religious ideas.

Then beginning in the early modern period, Natural Science began to assert itself and ended up by just calling itself Science from the latter part of the 19th century onwards.

What distinguishes Science from Natural Philosophy?

“All Science is either Physics or Stamp Collecting.” -  Ernest Rutherford.

With this bold statement one of history’s greatest scientists asserted that the scientific understanding of anything depends on developing an explanatory mechanism that we can do some maths and measurement with, and check against experiment or observation.

Despite doing a great deal of Natural Philosophy, including speculative metaphysics and alchemy on the side, Isaac Newton managed to put optics, and terrestrial and celestial mechanics into the fold of (Natural) Science and then much else followed and The Enlightenment blossomed. Eventually even the study of living organisms grew from the mere phenomenology of Natural History into the Science of Biology with the discoveries of Evolution, Biochemistry, and Genetics.

These developments tended to leave Natural Philosophy with all the phenomena, ideas, and questions that we could not develop mechanistic explanations or descriptive mathematics for, often because we could not concisely define or measure them. Thus metaphysics, consciousness, teleology, essentialism, and subjective experiences tended to remain there largely ignored or dismissed by Science.

Enlightenment thinkers dismissed Alchemy and Astrology, probably quite rightly, as proto sciences that did not work. Religious ideas and practices became viewed as having social and psychological functions only, with nothing useful to tell about the Natural Universe on the basis that nothing Supernatural exists. Anything that really exists falls into the category of Natural, no matter how astonishing or hidden, or improbable it may seem.

Magical ideas proved particularly resistant to mathematical quantification and description by testable mechanisms. Magic thus tended to become regarded as an Unnatural Philosophy concerned with phenomena that do not exist because we cannot readily measure them or easily perform repeatable experiments on them.

However, the far reaches of Physics in the Cosmological and Quantum domains do not yet conform to Rutherford’s ideals. Both fields remain at the stamp collecting phase, we have collected masses of observations, but we have no convincing and testable theories of mechanism, we just have a series of conflicting and often mutually contradictory ad hoc explanatory schemes. Cosmologists present extreme speculations as established facts. As Landau quipped “Cosmologists are often in error but seldom in doubt.”

Magic suffers from its own problems; in antiquity, magical theorists tended to borrow heavily from Religious ideas for a metaphysic and a vocabulary to describe their ideas and practices. Today, analogies to science often become employed. As Ramsey Dukes observes; Pseudoscience has become the language of choice for modern magical thinking. ‘Quantum’ has replaced ‘Astral’ in the magical lexicon. Yet that does not seem entirely inappropriate because as the great quantum physicist Richard Feynman asserted, “Nobody understands quantum physics” either.

In the cause of rendering all three of these disciplines less Unnatural and more consistent with each other, this book will advance many radical proposals and unusual hypotheses with supporting evidence, mathematics, and some proposals for experiments and observations.

Two magical experiments performed within the last thirty years gave very strange results and initiated the lines of enquiry that led to this book. Over the course of a career one becomes accustomed to Enchantments (making things happen by magic) going awry, sometimes solid objects in the vicinity shatter spontaneously, or teleport unbidden, sometimes unwanted metrological or seismic events have occurred, but these two experiments relate to Divination (finding information by magic).

In one of the two experiments a group of about forty magicians gathered in an Austrian castle and after a week of varied rituals and preparations set out to scry the Big-Bang event in a coordinated mass dreaming experiment. At the time, the so called Big-Bang had very much captured the popular imagination and become the officially sanctioned scientific answer. Many paperback books and documentaries had appeared on the subject and some of the Chaos Magic practitioners present had even gone so far as to identify Chaos Magic as ‘Big-Bang mysticism’. Despite expectations, all those who reported a result reported that the universe of 13 odd billion years ago looked much as it does now on the large scale. This provoked a quarter century quest to understand why almost all Cosmologists thought otherwise and whether they might have misinterpreted their observations, and whether a better interpretation exists.

Magicians have always made maps of the cosmos to guide them in their endeavours. For a long while they remained content with the solar system of the sun and most of its surrounding planets, and kabalistic schemes which derive from or relate to that, with maybe a nod to the surrounding celestial sphere. The magician Giordano Bruno went to the stake in 1600AD partly for asserting that other stars had planets orbiting them and that those planets carried other life forms.

In the other experiment conducted in the West of England, a group attempted to scry the results of horse races using a modified Ganzfeld procedure. Experimenters would first set up an array of unusual or surprising objects unknown to the test subjects. These objects would all bear numbers that corresponded to the race numbers of horses due to participate in a specific race in the near future. The test subjects would then enter a sensory deprived Ganzfeld state with opalescent lenses placed over their eyes and soft light shone into them, and with white noise played into their ears by headphones. Test subjects strove to achieve a vision of whatever object an experimenter would dramatically present to them after the race, the object chosen would correspond to the winning horse. The test subjects had no clues about what such objects might consist of or what races they related to.

Fortunately, we wasted no money on betting because it rapidly became apparent that test subjects frequently achieved false positives. They managed to scry unknown objects in the array, but these often did not correspond to the winning horses.

These results raised profound issues of indeterminacy, psychism, and the nature of time which led to several decades of research into the properties of the quanta which supposedly underlie the whole of natural reality.

Magicians have always made maps or models of how natural reality works. Early ideas about the Platonic essences of things and elemental classifications of phenomena as relating to earth, air, fire, and water gave way to models based on the rays and emanations and the luminiferous aether of pre relativistic physics.

If we have almost got to the underlying fundamentals of Nature with our investigations of the quantum realm, then perhaps we can attempt the final leap which will necessarily include accounting for magical phenomena in rigorous rather than pseudo-scientific terms.

When Newton proposed the concept of gravity, the idea of action at a distance without physical contact remained problematical to many including Newton himself. The later addition of the idea of a ‘gravitational field’ merely buried the problem until Einstein realised that what we call gravity means curved spacetime. As Wheeler later neatly summarised it, “Spacetime tells matter how to move; matter tells spacetime how to curve.”

In Einstein’s General and Special Relativity, space and time do not exist separately but always in the combined form of Spacetime. Moreover, spacetime has a definite geometry, structure, and properties, it can become stretched or compressed or curved or stressed by the presence of mass and energy. These principles underlie both the conventional Big Bang Cosmology and its alternative - the Hypersphere Cosmology that chapter 2 will explain.

In some approaches to quantum fundamentals, the mass and energy of the quanta themselves consist of geometric distortions in the fabric of spacetime. Chapter 4 will explore the idea that the existence and all the properties and behaviours of fundamental particles may arise from the geometry of spacetime if it has just two more natural dimensions than commonly realised.

Magical theories also require some sort of a medium for effects which extend across space and time. Traditional ideas about ‘spiritual forces’ or astral planes or ethers have never proved particularly useful or satisfactory and the more modern idea of ‘magical energy’ implies little more than some substance that sometimes does what someone wants it to.

This book will attempt to show that a (curved) six-dimensional spacetime could account for the structure and behaviour of the entire macrocosmic universe, the existence and properties of all fundamental particles of the microcosm and their quantum behaviours of superposition,  entanglement, and apparent indeterminacy, in addition to accounting for the probabilistic nature of enchantment and divination in magic.

Our most astute futurologist provokes us with the thought that the quest of Natural Philosophy may lead us to dark places: -

"The most merciful thing in the world, I think, is the inability of the human mind to correlate all its contents. We live on a placid island of ignorance in the midst of black seas of infinity, and it was not meant that we should voyage far. The sciences, each straining in its own direction, have hitherto harmed us little; but some day the piecing together of dissociated knowledge will open up such terrifying vistas of reality, and of our frightful position therein, that we shall either go mad from the revelation or flee from the deadly light into the peace and safety of a new dark age."

Yet only a Promethean response to the Indifferentism and Hostility of the Cosmos towards our randomly evolved species seems to offer it any long-term chance of survival. To this end we must attempt to correlate the contents of our minds and voyage far.

And now for something completely different - Circe’s Children. 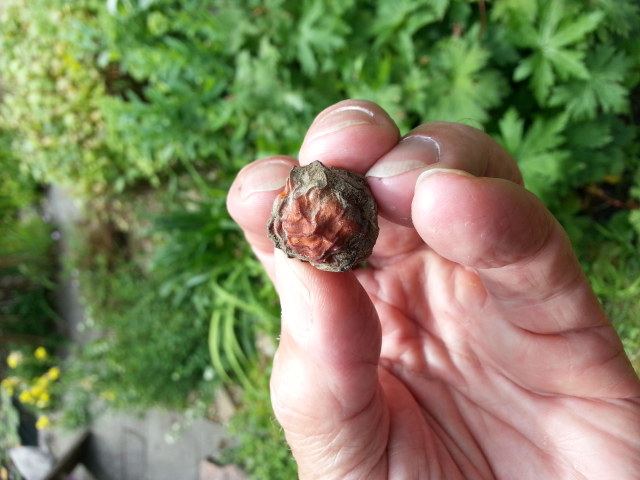 It all began with seed provided by the Greek wizard Xarisal. After seven years slow growth in the chilly British climate, Circe, the largest of the three Mandrakes (Mandragora Autumnalis) at Chateaux Chaos, has produced a mandrake apple, a seed pod. I shall offer some of her children for adoption at the next Druidical Eisteddfod with a view to their widespread reintroduction to Southwest England and Wales over the next century.

Lastly, another addition to the lockdown sci-fi creations, a major upgrade to the Frontier Space War game system with multiplayer and solitaire options and multiple backstory possibilities including neo-modern political and culture war, Alien encounter, and a Dune-style neo-feudal conflict. See below in the games section.

Read 8095 times
More in this category: « End June 2020 The voyage of the Leif Erickson and the Garuda »
back to top
feed