Something extraordinary came out of the bubonic plague of 1665-6. Isaac Newton retreated to the family farm and developed the equations of gravitation. Hopefully, this current lockdown may lead to some interesting innovations.

With a provisionally credible and currently unfalsified model of the Yog-Sothian hyperspherical geometry of the cosmos awaiting confirmation: -

Thought returns to the microcosm of the quanta, the realm of the blind mad god Azathoth.

At present we have  a model encompassing a considerable number of types of quanta each of which may have its own type of field and each of which can behave as both a point particle and as an extended wave and which can apparently exist in several contradictory states at once and which can apparently have instantaneous connections at any distances. We have mathematical recipes for some of these phenomena, but the maths involves un-visualisable concepts and abstract dimensionalities and some of the phenomena remain apparently completely random.

How in hell does the tiny stuff apparently underlying the whole of reality really work?

Firstly, Fields. According to quantum field theory, every quantum consists of an excitation of a quantum field that extends throughout all of space. This implies that maybe four or perhaps twenty-four different kinds of fields pervade all of space. Do the quanta subtend these fields around themselves or should we regard the fields as more fundamental and the quanta as mere disturbances in them? If, as in General Relativity, mass-energy tells space-time how to curve, and space-time tells mass-energy how to move, then they both represent aspects of the same phenomena. Any particle of mass appears as a curvature that extends throughout all of space, it merely appears to have a solid boundary around it because of short range electrostatic effects. So perhaps quanta and fields represent aspects of the same phenomena and we should regard neither as separate nor more fundamental.

Gravitational waves and electromagnetic waves always appear to propagate at the speed of light, in accordance with the idea that such waves represent moving disturbances in such fields originating in the accelerations of objects carrying mass or electric charge. However static masses and electric charges give every appearance of exerting instantaneous effects over any distance although the forces do decline by the inverse square of distance where Euclidian geometry applies. Arguments over whether static fields exert instantaneous or lightspeed effect continue but seemingly instantaneous effects do appear in the non-local models of some interpretations of quantum mechanics.

The Field component of reality probably does not need four or twenty-four components, it probably consists of a single Field with a somewhat greater than 3-space, 1-time dimensionality. A Field with a symmetrical 3-space, 3-time dimensionality with both 3d space and 3d time curved to form a hypersphere might do the trick. A 3s3t spacetime metric appears to offer just exactly enough degrees of freedom to account for the manifestation of all the quanta observed so far. (It predicts an additional Duon boson only, and it denies that the Higgs mechanism applies to this universe and that we have really detected a Higgs boson.)

See https://www.specularium.org/3d-time for some preliminary speculations.

In addition to having probability lying at right angles to ‘ordinary’ time in an orthogonal plane of imaginary time (in an observer’s frame of reference) we probably need to accept the two-way nature of time that most of the physics and some of the magic suggests. This does not seem restricted to the realm of the ultra-small as the following example illustrates: -

We can easily observe back-reflection when looking at a widow with low light or darkness behind the window. We can see a reflection of ourselves and our surroundings in the window as some of the light hitting it reflects off the front surface of the glass, whilst some of it goes through the glass (as others can see us from the other side of it). Now the amount of light which becomes reflected back off the front surface depends on the thickness of the glass!

This seems deeply weird. How do light quanta anticipate the thickness of the glass before deciding whether to bounce off it or to go through it? The Transactional Interpretation of Quantum Physics seems to offer an explanation. In this interpretation, the forward wave function of each quantum of light goes through the glass and it also reflects off the glass as well in search of an electron in someone’s eyeball or in the scenery to act as a receiver. Potential receiving electrons send a confirmation wave BACKWARDS IN TIME down the wave path to the electron which emitted the light quantum in the first place. The thicker the glass the more trouble the forward and backwards waves have, so a handshake between forward and backward waves along the air only reflection path becomes more likely. The handshake results in the collapse of the completed wave function and the effective exchange of a ‘particle’ of energy between emitting and receiving electrons. The wave functions act like a mysterious type of aether which acts across time to feel out possible futures.

From some perspectives the light quantum or photon exists only as a wave/anti-wave exchanged between electrons, but what about the electrons themselves and everything else we think of as ‘matter-particles’? Matter quanta also exhibit wavelike qualities too, and perhaps in a six dimensional vorticitating hyperspherical universe they may consist of overlapping wave/anti-waves that go right round the universe with the endpoints representing particles and the antiparticles they may rotate into at their antipode points.

I have a few thoughts on this which I have not fully explicated or incorporated into hypersphere cosmology yet, but it goes a bit like this: -

In Cramer's Transactional Interpretation of Quantum Physics, we can view a 'photon' as an exchange of retarded and advanced waves between electrons.

In some senses we can consider photons as the endpoints of standing waves.

Milo Wolff takes this a step further with his Wave Structure of Matter and has matter particles as the points where inward and outward standing waves converge, but he has the inward waves reflected from the entire universe.

In Hypersphere Cosmology every point in the universe has an antipode point.

Thus, the universe could have an overall matter-antimatter balance with the two kept well out of each other's way.

Perhaps we should regard The Field, in which quanta exist as wavelike or particle-like excitations or which quanta subtend around themselves, not as something which fills spacetime but as spacetime itself.

Lockdown has achieved some remarkable results: - Reduced fossil fuel use and carbon emissions, zero economic growth, wildlife thriving, men growing their hair back to a proper hippy length, fewer people buying pointless stuff and junk, everybody devising new forms of self-entertainment and looking out for their friends and relatives, the professional classes home educating their offspring better than schools, people having time to reflect on who and what really matters to them in this life.

Perhaps after this pandemic finally ends, we should institute some form of annual three-month public holiday every year.

Historically we have tended to favour oats for high performance creatures like racehorses, gladiators, and highlanders. It seems a good move to base most of one’s carbohydrate intake upon the proteinaceous and roughage rich foods of oat porridge and oatcakes.

So, herewith in response to the overwhelming acclaim for savoury Tuna-Porridge in the previous blog, a sweet dish to complement it: -

Oat Cuisine Recipe Number 2 of 8,127, (a large sack of oats lasts a long lockdown). Place a cupful of oats in a saucepan, add dried mixed fruit, glace cherries, any nuts or bits of fruit available, a teaspoonful of powdered ginger and/or mixed spice, a splash of dark rum and a little water. Warm with stirring until it forms a thick paste. The nutritious result usually tastes like a delicious hot fruit-cake puree. 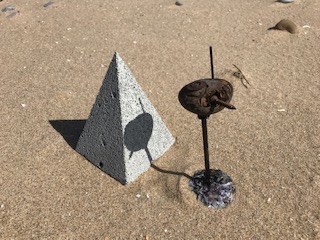 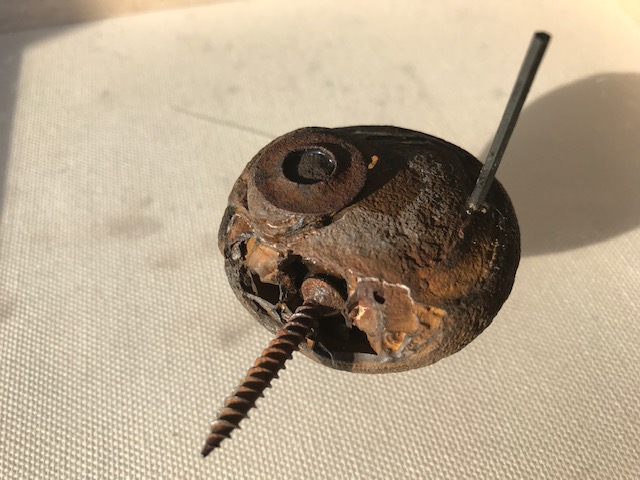 The Misanthropy has a bad attitude. It fires upon anything that approaches the abandoned star system it has guarded for several millennia - a sort of metaphor for social isolation.

The base consist of the end of a charred aluminium drinks can recovered from a beach fire pit. The spacehulk’s body consists of a rare sea worn volcanic bolide of iron rich vesicated basalt. A few drops of Araldite hold it all together.