Magic works in Practise but not in Theory Featured

Magic works in Practise but not in Theory.

I vaguely remember making this statement to Gordon White during a rather peculiar interview. We had found a large table in an empty waterfront pub and set up a microphone and recording apparatus. During the course of the prolonged interview the pub filled up with besuited office types and even the table we occupied became crowded with rather bemused clerical and administrative workers taking frequent sidelong glances at us and pretending not to listen as we ploughed on with the strange metaphysics and barely believable biography. As the general hubbub around us rose we had to speak louder and louder.

The quote keeps getting fed back to me by correspondents and it deserves further analysis; the principle seems to crop up everywhere you look.

Newton’s formulae for Gravity work well in Practise, allowing us to calculate planetary orbits, spacecraft trajectories, and the behaviour of cannonballs and falling apples. However, the Theory that the formulae imply doesn’t really make sense as it means instantaneous force at ANY distance. Neither Newton nor anyone else really liked this. The later addition of the idea of a ‘gravitational field’ doesn’t really make the problem go away. Einstein’s new General Relativistic description of gravity as spacetime curvature dispensed with forces and gave even more accurate Practical astronomical predictions, but it also leads to the unresolved Theoretical catastrophe of spacetime singularities. Work continues, hypersphere cosmology might do it.

Quantum physics presents another example. The formulae of quantum mechanics give outstanding Practical results, allowing us to build electronic devices and lasers, however, despite the efficacy of the pragmatically derived formulae, humanity does not have a coherent and generally agreed Theory of how quanta do their stuff. Many consider that quantum field theory has only epistemological value, it describes merely our limited knowledge about quanta; it doesn’t, or cannot in its current form, describe them directly. Work and controversy continue.

Religion provides perhaps the most spectacular example of something that works in Practise but not in Theory. Billions of people find the Practise of their religion perfectly satisfactory, yet the Theory behind every religion remains completely self-contradictory and nonsensical. Paradoxically, only psychological Theories of religion (rather than theological ones) can make any sense of the phenomena, but you cannot make religions out of these, or can you?

As far as we can tell from archaeology, the Practise of Magic has continued since the dawn of human sentience, yet it remains a Practise in search of a Theory.

Underlying the Practise lies the reality that intent and imagination can make things happen. Exactly how this works has remained the subject of thousands of years of Theoretical debate.

The early Shamans modelled the effect as arising from the ‘spirits’ of animals and natural forces. Pagan magicians attributed the effect to the intercession of the gods and goddesses of their pantheons. Monotheist magicians attributed it to their god or to various of his angels, devils, and demons. Those three magical paradigms all also flirted with necromancy at times and invoked the supposed powers of the dead.

Materialist philosophies stimulated a new flowering of magical theory. Everything from magnetism to the supposed luminiferous ether supporting electromagnetic radiation became co-opted as a model or an analogy for the mechanism of magic. The discipline of parapsychology attempted to render magical effects objectifiable and repeatable but in doing so it removed most of the conditions under which they can manifest and it achieved little more than trivial probability distortions which tended to decline as the experimental setup itself drained motivation away. Magicians should remain thankful for the failure of parapsychology; they cannot convict us for it now.

Some magicians remain content with the ‘bare’ theory that intent and imagination can make things happen and do not overly concern themselves with the ‘how’. Others take a variety of views of entities and egregores and ‘spirits’ with some arguing for their separate independent existence and some arguing that purely mental constructs of such phenomena (tulpas) would have indistinguishable effects anyway.

Quantum physics continues to offer the prospect of some sort of mechanism for the implementation of magical intent, perhaps they both work for similar reasons, perhaps not, but if they do, then the Theoretical elucidation of either may throw some light on the other and leads to improvements in the Practise of both.

Presently, a combination of the Psi-ontological realism of the PBR theorem with Cramer’s Transactional Interpretation of QM seems to offer some promise although it remains unclear how intention interfaces with this.

Lockdown on a remote shore has involved some inconveniences but also some unexpected freedoms, like day long reading sessions and no showers for a month in order to conserve resources for cooking, (an old soldier once told me that you only ever need to wash armpits groin and feet, the rest takes care of itself - and so far so good).

With limited resources, culinary innovations can occur, I proudly present Tuna-Porridge, - breakfast of champions. Soak some oats for a few minutes in a small amount of water, add a tin of drained tuna flakes, season with chili sauce and whatever savoury herbs and spices you have. Heat with continuous stirring till it goes into a thick paste. Awesomely nutritious and filling and it tastes delicious. It would also make a great pie, pasty or flan filling.

The lack of a fully equipped shed at first seemed a concern, but beachcombing combined a little improvisation led to these: - 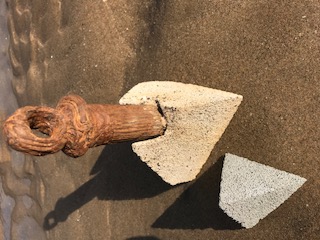 The Ankh topped Pyramid of Shub-Niggurath, plus a tetrahedron which doubles as a simplified Pentachoron.

The Elder Goddess Shub-Niggurath represents the Cosmic Biota. The Egyptian Ankh symbolises Life. The entire edifice signifies ‘The Intent of Life’, (A spell for hope in these dark times as Death stalks the land).

The Ankh-like iron bolt came from an ancient wooden shipwreck and needed a lot of tar removing from it. The pumice like stone may consist of volcanic pumice or lightweight composite building material wreckage that got washed in by the tide, grinding it away against a flat rock gave the pyramids their facets.