There seems much to celebrate this year: -

Herewith for a Christmas card, a picture of The Three Witches of Chateaux Chaos. 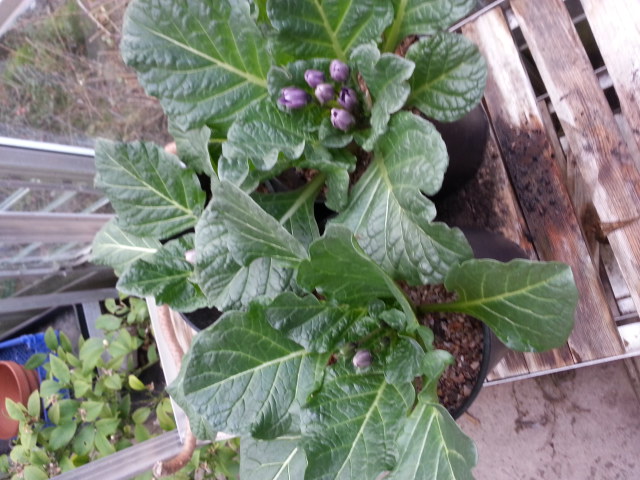 These three Mandragora Autumnalis have taken seven years from seed to finally all flower at once for Solstice. They usually sprout around Samhain, last year the largest one produced a single flower for the Solstice season, this year they have produced more than twenty between them. They don’t seem to enjoy the British climate and would probably prefer their native Greece. Telepathic communication with them gradually develops, they request water and baby-bio when they want it. We don’t have many pollinating insects at this time of year, so I’ll do the sex for them with a tiny paintbrush. Hopefully by Beltane I’ll have seeds to distribute to my Druid friends.

Our eldest daughter up in the Highlands has this year produced a third grandchild for us, this time a boy. They plan to feed him oats and venison and have him learn Gallic; I hope he doesn’t end up voting SNP.

We have a splendid and epochal General Election Result, the British always do the right thing and vote Conservative in a crisis. Now we can finally extricate our country from the ghastly undemocratic synarchy of the EU political project.

Well done Boris you loveable old rogue. Well done Jeremy Corbyn, the finest leader of the opposition the Conservatives could hope for, it just seems a pity you probably won’t lead the opposition to the next heroic defeat of the lunatic left. Well done Jo Swinson for exposing the illiberal dimocrats as hectoring busybodies and splitting the traitors vote. Above all thanks to Nigel Farage who made independence possible and did the right thing in the final battle. We should elevate him to the highest echelons of the peerage, for no man hath done more for his country, perhaps Marquis or even Duke of Dover?

Null points for Nicola the Loch Ness Sturgeon, you can still play the Oppressed Scot card to screw more subsidy from Westminster, but you no longer face the terrifying prospect of another Indyref which you would loose because the Scots would now face a choice between a UK that gives them a big say and a big subsidy and an EU which would offer them neither.

When I first joined the fight under the UKIP flag many years ago this outcome seemed a very remote possibility, but somehow the British have finally managed it, conquered their fears and thrown off the shackles. I hope it will prove an example to other nations who will follow and that the EU will eventually revert to a simple group of freely trading friends as originally advertised. We taught the modern world democracy, and now we have shown how to maintain it.

This summer’s breakthrough in Hypersphere Cosmology leaves only dark matter to eliminate. The newly discovered mechanisms and equations of the Distance-Redshift relationship and Hyperspherical Lensing have eliminated the expansion hypothesis and dark energy entirely. The Big Bang hypothesis itself will not last much longer.

See https://www.specularium.org/hypersphere-cosmology and look at how much attention its getting.

Work on the hypothesis of Three Dimensional Time has taken second place to HC for a while but evidence seems to pile up in support of one of its main predictions, the existence of a Duon Boson: -

Try googling ‘X17 Boson’ and see all the excitement.

This strengthens my conviction that the Higg’s Boson does not actually exist, the Higg’s mechanism does not apply, and the miniscule 125GeV blip on the graphs from CERN probably merely consists of a fleeting ZZ diboson.

The Arcanorium College website will close at the end of January 2020. For more than a decade it has provided a fertile and productive forum for the exchange of magical ideas. However, it has fallen prey to the vices of the internet, zero length attention spans and a relentless demand for novelty for which it does not cater. Plus, Chaos Magic seems to have become a victim of its own success, it has become the prime esoteric paradigm of western magical thought and you can find hundreds of books and websites about it.

Don’t forget to treat the Wizard in your life to a copy of The Esotericon and Portals of Chaos, for this festive season or the dark nights ahead.

Have a good one. Pete.

Breaking News! A visiting friendly giant with mathematical skills just put all the type 1A supernovae data through a massive calculation for me and herewith the result: -

It works for  ALL data points. Appropriately enough the giant himself comes from the Antipodes (Australia).