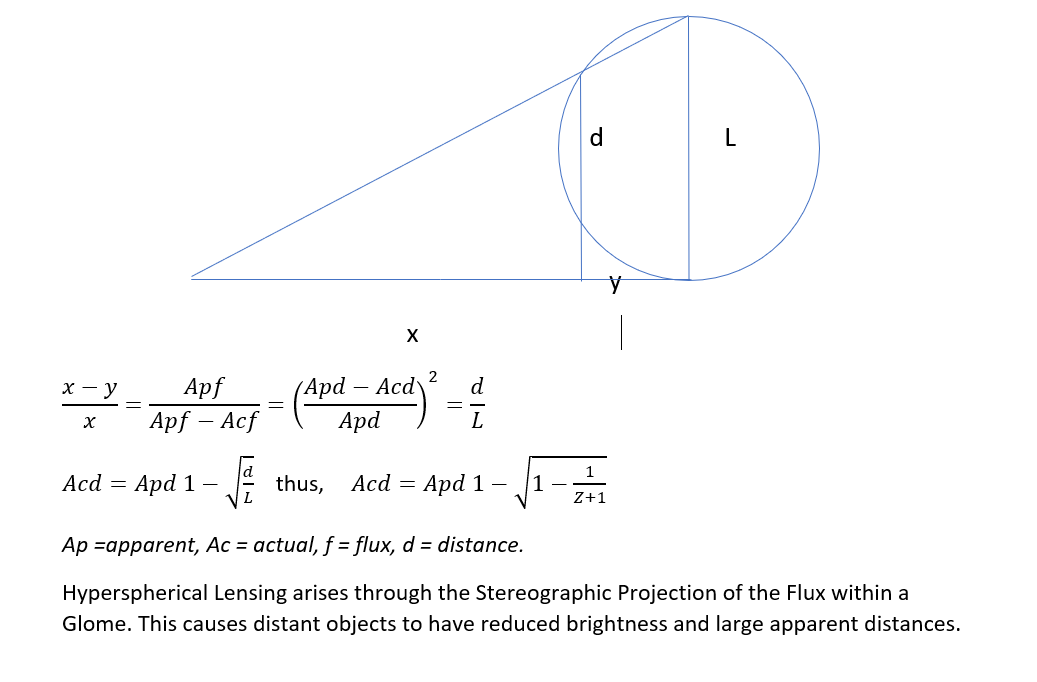 The above provides the Geometry and Physical Principle for the Algebraic formulation of Hyperspherical Lensing shown in the previous Augblog.

Hypersphere Cosmology seems to evolve towards the exact inverse of the LCDM- BB theory, both seem to fit most of the major observations but in radically different ways. In HC the universe does not expand, rather it explains redshift and brightness decease in terms of a small positive curvature which leads to time dilation and hence a redshift dependant on distance and a lensing effect which dims distant light sources instead of an accelerating expansion driven by dark energy as in LCDM.

In HC the small positive spacetime curvature appears as an acceleration which accounts for the anomalous galactic rotation curves without recourse to dark energy.

HC predicts an antipode which will appear as apparently redshifted and dimmed to unobservability. This contrasts with LCDM which predicts an initial BB singularity of apparently unlimited brightness.

Observations alone may prove insufficient to distinguish between the two models as they both account for the same phenomena, albeit in radically different ways. However, the HC model does contain less Phlogiston, instead of singularity, dark energy and dark matter it has the mechanism of positive spacetime curvature.

The evidence concerning cosmic evolution remains debatable, some of it seems to fit with LCDM-BB, some does not. In particular we seem to observe structures that look far too huge and developed at vast distances for them to have evolved in the early history of expansion. HC asserts that the universe will look broadly homogenous and isotropic at all points in space and time.