In this season of Harvest Festival a number of items seem to have come to fruition.

Tarot. I recently received a copy of the Chaos Magic Tarot direct from the printers but with no indication of who authorised its dispatch to me (but thanks anyway).

If a camel consists of a horse designed by a committee then what do you call a tarot designed by 47 artists? Well it looks CHAOTIC. Some may find it creatively chaotic; others may find it a rather random entropic mess. I remain doubtful about it. The coordinators of the project have stuck to the traditional 4 suites and court cards and 22 trumps and the continuing influence of antique and discredited ideas of the classical elements, astrology, and kabala remains vaguely apparent. Well I suppose occultists can continue to use it for the same old attempts at tarot reading without seriously challenging any paradigms. Overall it looks rather like someone bought 78 different tarot packs and selected one card from each, a lot of bother for no real improvement in principle, plus it doesn’t seem to have the usual accompanying booklet to broaden the users’ appreciation of the images with written exegeses, and some of them seem to have arisen from minimal thought and effort.

I feel a little disappointed that a bunch of self-professed modern Chaoists has fallen back on the old formulaic structure rather than boldly creating something new and imaginative.

Just how much of a hand the Ineffectualists Of Transgression XI0 had in this remains unclear, nobody seems to have claimed responsibility.

Graphic images on moveable cards can certainly prove useful for a lot of esoteric purposes beyond sortilege for divination, they can additionally function particularly well as an aid to visualising forms for invocation and evocation, and for this reason Matt Kaybryn and I decided to break with the old tarot structure and do something completely different with EPOCH.

Brexit. The sky has not fallen in since we voted for Brexit, cocked a snook at the Synarchy of big-business and the political class, and demanded back the right to address the challenges of globalisation on our own terms. The export side of my little enterprise has achieved a magnificent harvest over the last weeks as a result of the currency correction.

Frequency. Hypersphere Cosmology on this site has clocked up nearly 1/3 of a million reads with some sign of argumentation or agreement but no sign of a refutation in sight.   For this month’s Ouranian meditations on Arcanorium College I took a fresh look at Cosmological Redshift from the ‘other side’, and it provided an interesting clarification. Redshift of course refers to the increases of wavelength that we can readily observe with spectroscopes and the simplicity of that observation has led to the fundamental misconception underlying standard cosmological models; that the expansion of the underlying spacetime has led to the observed increases. If we had chosen to focus on the accompanying decrease of cosmological frequency shift instead we might have ended up with a very different explanation. Frequency decreases in proportion to cosmological distance, implying a deceleration and this appears quite clearly if we rearrange the Redshift equation to show the Frequency Shift instead, we get the more intuitively obvious: -

Where fo = Observed frequency, fe = Expected frequency, d = Astronomical distance, A = Acceleration due to the small positive curvature of the universe, as appears in the residual Anderson deceleration.

Sculpture. As I have already fashioned a ‘bronze’ of Lugh, this year’s summer sculpture consists of a figurine of The Morrigan. (I need the long hours of natural daylight to work on small fiddly constructions in dark materials).

The Morrigan represents the Celtic Ishtar, goddess of love and war, sex and death, so in the absence of authentic historical Celtic iconography I’ve borrowed a bit from Babylonian and Greek imagery and given her a Raven’s headdress and mask, an instrument of war, and a suggestive fruit in the form of a peach (debate rages over whether the ‘golden apple’ of Eris actually implied an orange or an apple, or another fruit). Inside her milliput form she has skeletal reinforcements of steel and copper wire for war and love, and some sheet aluminium (the Ouranian metal of magic, flight, and extreme amphoteric chemical reactivity) in her headdress. I might arrange a limited edition in bronze if anyone has an interest, they will come out at around a couple of grand each, admittedly rather more than the JV tea towel, but they will last for millennia. 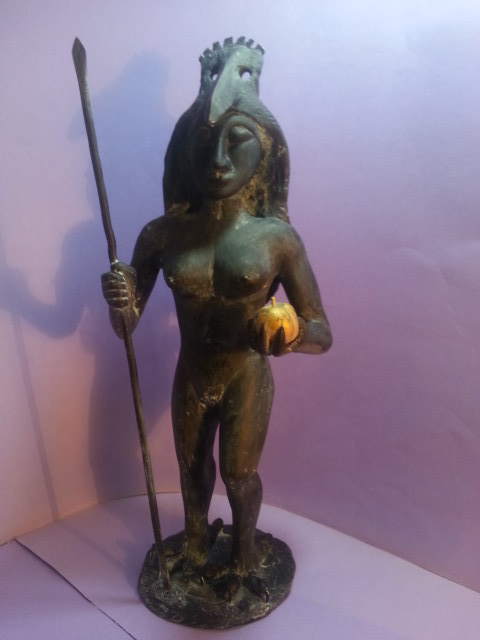