Has Britain reduced itself to an international laughingstock by replacing its Prime Minister twice and reversing all its policies in the space of a couple of months?

Rather, I prefer to think that we have set a shining example to people living under ghastly systems of glorious authoritarian leadership the world over.

Nevertheless, we do look set for a winter of discontent having demanded that the government print half a trillion pounds to subsidise furlough in lifesaving covid lockdown and to subsidise hiked fuel prices.

Printing money effectively devalues the existing money, and it thus acts as a tax.

It seems we have decided to throw a few peanuts to the worst affected members of our own species by way of a risible climate change compensation, and to carry on burning fossil fuels until it either becomes climactically catastrophic for us all, or clean energy becomes a cheaper way of fuelling our demented addiction to growth.

Some things do look a bit buggered. In an attempt to inflate property prices, provide cheap labour, and depress wages we have let another 500K people into these stupidly overcrowded islands. The costs of Covid Furlough, resisting Russian aggression, and Brexit have proved high but will prove worthwhile. Paradoxically everybody and his uncle wants a pay rise in excess of inflation - but nobody wants any more inflation………

Yet on the bright, side over half the nation has managed to disabuse itself of the infantile delusions of religion. Have a look at the recently released the results of the 2021 census: - 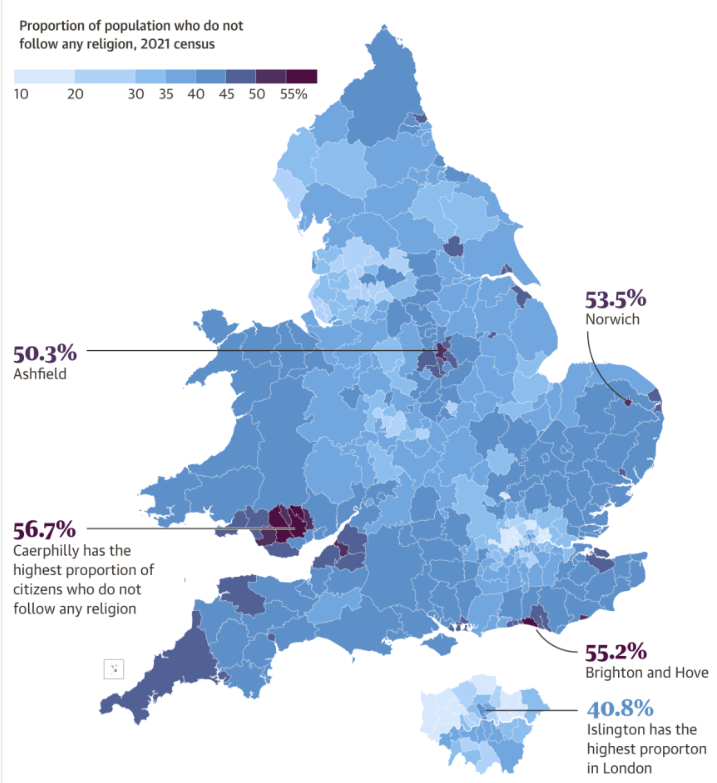 I note that the locations of my place of birth, Chateaux Chaos itself, and my holiday retreat all feature as hotspots of atheism. Cause or effect? I don’t know, but I do like to think that I can still deconsecrate a diocese at a hundred paces with a single chaobolt. London remains a bit of a worry, but the residues of religion there probably arise because of its >50% immigrant population, and in time our freethinking British culture will probably corrupt them.

The last Czar of the Russians must fall, and the corrupt neo-feudal despotism he has created from the ashes of Soviet communism must fall with him and become replaced by a prosperous free democracy. Putin has revealed himself as monstrously egocentric and deluded, inhumanly barbaric, and also geopolitically and militarily incompetent.

Keep those conjurations coming. Support for him wanes as his hideous ambitions crumble.

Festive Gifts for the Illuminati.

Royalties from the books funds the maintenance of this free Specularium website and its Arcanorium College facility. Thus, we unashamedly promote the books here. If you haven’t yet read the lot so far, then herewith a guide: -

Liber Null & Psychonaut  and Liber Kaos. These two seminal books revolutionised the theory and practise of magic and they remain indispensable for the modern understanding of it.

The Apophenion and The Octavo. These two books explore the magical imagination and the magical creation of personal realities and the creation of useful gods and goddesses.

The EPOCH. The great triple grimoire of elemental, planetary, and stellar magics embodies the only workable version of the Necronomicon ever brought to this world. This giant book comes replete with full colour illustrations and a separate deck of altar sized cards for evoking or invoking just about anything the magician may require.

Interview with a Wizard. A book about almost everything, the distillation of a lifetime’s experience in 365 questions and answers, plus the probably correct alternative to the big bang theory in the appendix.

(For all these books see the Publications pages on this site)

Using a little known tool developed by Kurt Godel, one of the world’s most outstanding logicians who remains famous mainly for his Incompleteness Theorem and his decent into madness, I have created a seasonal present for the world, - a remedy for all those pesky singularities that plague our physics and our understanding of the universe.

If spacetime and mass/energy have a mutual dependency, then we have no reason to assume that spacetime exists independently and infinitely beyond the presence of mass/energy.

Contemporary theoretical physics suffers from the delusion that mass/energy can become concentrated in an arbitrarily small volume, including zero volume. This has led to the assumption that black holes must contain singularities and that this universe arose from a zero dimensional singularity and the assumption that fundamental quanta can exist as zero dimensional point particles.

The Schwarzschild  Solution of General Relativity: -

r = 2Gm/c^2 shows that an event horizon at radius r will arise when a given mass m collapses to that radius under its own gravity creating a black hole.

The Penrose-Hawking Singularity Theorems assert that nothing can prevent further collapse and thus that a spacetime singularity consisting of a zero-dimensional point of infinite density must inevitably form within any black hole.

The Godel Solution of General Relativity: -

w = 2sqrt(piGp) does however indicate that something will prevent the collapse of matter into spacetime singularities.

‘Matter everywhere rotates relative to the compass of inertia with an angular velocity (w) of twice the square root of pi times the gravitational constant (G) times the density (p)’.

As matter becomes denser, spacetime curvature increases and a compact body acquires a radius excess which gives it more volume on the inside than an outside observer would expect from its exterior radius by assuming 4/3 pi r^3 for flat Euclidian space.

When a body contracts to r = 2Gm/pi c^2  (or pi r = 2Gm/c^2) the radius excess makes its internal ‘diameter’ equal to half of its circumference and the body becomes a Glome Hypersphere. With a volume of 2pi^2 r^3 or 2L^3/pi where L means antipode distance.

The Godel Metric w = 2sqrt(piGp) then supplies the internal metric of such hyperspheres in the reference frame of internal observers, and it shows that such bodies must have an angular velocity w.

Substituting hypersphere volume into the Godel metric shows that a Glome hypersphere will rotate with an angular velocity of pi c/L and hence a frequency f of c/2L and have balanced centripetal and centrifugal accelerations a of c^2/L.

And that hypersphere volume v = 2L^3/pi

The mass inside a Glome hypersphere does not rotate as a simple sphere with a single axis of rotation, but rather it rotates about the randomly orientated axes of the Hopf Fibration.

Hence such Glome Hyperspheres cannot contract any further because that would cause them to rotate faster than light. This falsifies the Penrose-Hawking Singularity Theorems for both black holes and the universe as a whole.

If the mass of the universe remains constant, then so does its size, despite appearances. (See the Hypersphere Cosmology redshift-distance and hyperspherical lensing relationships.)

Quanta also have characteristic wavelengths many orders of magnitude greater than the antipode lengths suggested by L = 2Gm/c^2 for such particles. Yet the wavelengths of quanta have a directional quality which we most commonly observe in the direction of propagation rather than transverse to it.

The following calculation shows that given the Planck-Einstein relationship E = hf and the Godel metric w = 2sqrt(piGp), quanta with mass have a definite volume: -

This closely matches the Einstein-Cartan volume of a quantum ~ Gh^2/mc^4  (derived by other means).

Thus, it seems probable that quanta embody a hyper-geometrical component in their probably variable dynamic geometry, rather than existing as simple 3-sphere Glome Hyperspheres. Rotating Hypertoruses of some kind may supply a solution. Research continues.

As quanta have a spatial volume, then that volume sets yet another limit to the compressibility of matter and its maximum possible density. This also sets a minimum bound for the mass of any black hole.