Marxism will go down in history as a profound tragedy because it allowed autarchy to survive industrialisation. Industrialisation generally and gradually brought democracy in its wake except where the dictatorship of the proletariat triumphed. The dictatorship of the proletariat inevitably meant dictatorship by elements of the middle classes. Tsars became replaced by Commie-Tsars in both Russia and China; authoritarianism and repression continued under new management, democracy did not get a look in. Marxism survives now only in North Korea and in half-hearted form in a few third world tinpot dictatorships.

Having found that Marxist economics simply could not compete with the economies of democratic states, both China and Russia eventually abandoned it in favour of crony-capitalism and nationalism whilst preserving the machinery of dictatorship. In effect they reinvented a form of neo-feudalism or fascism. The poor in both Russia and China lead very impoverished lives compared to people in democratic industrial societies. The autocrats in charge of the Chinese and Russian dictatorships live in fear of their own people and rely on repression, militarism, and war or threat of war to maintain their positions. They attain their positions through naked power struggle and then must maintain it to survive. They cannot retire, their only way out lies in a box.

Putin has launched a vicious war in Ukraine to strengthen his grip over his own politically fragile and economically weak country and in this he seems to have catastrophically underestimated how much resistance he would face from his intended victims and from the free world.

A month ago, I requested that the world’s magicians conjure to ‘Turn the people closest to Putin against him’.

My thanks for the excellent response. Remember that for best results in magic we need to Divine Short and Enchant Long, so keep those spells and rituals coming and widen the definition of ‘closest’ to include more of Putin’s diminishing group of supporters.

Europe will only become free of oppression and war when the Russian autocracy falls, and Russia becomes a democracy. The unpopular dictatorship of Belarus will not survive without support from Russian autocracy. The fall of Putin’s regime will contribute greatly to this. President Biden has shown statesmanship and a grasp of political reality in encouraging revolt against Putin.

The last piece of the Hypersphere Cosmology jigsaw puzzle finally fell into place. The observed distribution of quasars has always been interpreted strong evidence for galactic evolution following a big bang origin for this observed universe. Most of the observed quasars seem extremely distant and hence we see light from them that left them billions of years ago. Hence theorists concluded that quasar behaviour mainly arose during the early development of galaxies.

Hypersphere Cosmology asserts that we inhabit a universe finite and unbounded in time and space and that we will observe galaxies at all stages of evolution spread across all of time and space.

Why then do we observe quasar galaxies mainly at very great distances?

We can only observe a quasar if the beam coming out of one of the poles of its black hole happens to point directly towards us, and as galaxies lie randomly orientated in space this becomes a very unlikely occurrence. However, the small positive curvature of the hypersphere of the universe increases the probability of a quasar beam becoming ‘tilted’ in our direction and the probability increases exponentially with distance.

The Occultaris parts 1 & 2. The secrets of the universe.

Many years ago, it became apparent that cosmologists had made a serious mistake in interpreting cosmological redshift as recession velocity and creating a hypothetical big bang. Whilst I worked on the problem the big bang the theory became ever more baroque with the addition of hypothetical dark energy and dark matter and cosmic inflation. A more elegant solution in the form of Hypersphere Cosmology gradually emerged. Two key insights allowed its development, firstly that a small positive spacetime curvature in the form of a deceleration A, where 2GM/L2 = A, would redshift light traveling across a hyperspherical universe in proportion to distance, and secondly that the (generally ignored) Godel metric    W = 2sqrt(piGp) describes the inside of any hypersphere including the universe itself and the inside of a black hole in the reference frame of an internal observer. This rather than the Schwarzschild metric for the interior of a black hole in the reference frame of an exterial observer provides the key to a stable non-expanding universe and black holes which do not contain singularities. All this constitutes The Occultaris part one, which radically revises our entire metaphysical and ontological view of the universe, our place within it, and the probability of highly intelligent life having developed elsewhere in a universe without temporal boundaries.

The Occultaris part two remains a work in progress. It aims to clarify the awesome theoretical and conceptual confusion in our understanding of the quantum realm underlying reality.

Whatever mechanisms account for the phenomena of magic in this universe probably have their origins in the properties and behaviour of the quanta.

The current official Quantum Field Theory implies twenty six fundamental fields, twelve quarks, eight gluons, an irreconcilable wave particle duality, virtual particles with seemingly arbitrary properties, non-locality, and an underling spacetime metric which contradicts relativity. Moreover, a lot of the maths looks like a mere descriptive formalism that gives no clue as to the underlying ontology, and the ‘maths’ of quarks and gluons looks very dodgy and has little predictive power. The standard model also requires a Higg’s Boson to satisfy parts of its abstract mathematical scheme and at vast expense some unconvincing evidence has been manufactured for this but not everybody seems persuaded of its reality. The standard model of Quantum Field Theory does not include gravity, and the whole edifice looks like a phlogiston rich ad hoc mess. Where did it perhaps start to go wrong?

Perhaps the photon does NOT constitute the quantum of the electromagnetic field. In support of this heretical and blasphemous idea note that: -

2) Photons do become exchanged between electromagnetically charged particles and we can cause their emission by manipulating charged particles and measure their absorption by the movement of charged particles, but all matter particles except neutrinos carry charges anyway if we include neutrons as carrying both positive and negative charges simultaneously, and neutrinos travel at lightspeed anyway, so we should not expect them to exchange photons in any easily observable way.

3) Photons interact equally strongly with protons and neutrons but less strongly with electrons which carry the same magnitude of charge as protons.

4) Maxwell’s equations describe electric and magnetic fields adequately but combining them to create moving electromagnetic waves does not actually yield the observed properties of photons whose energy depends on their frequency rather than on the intensity of the waves. 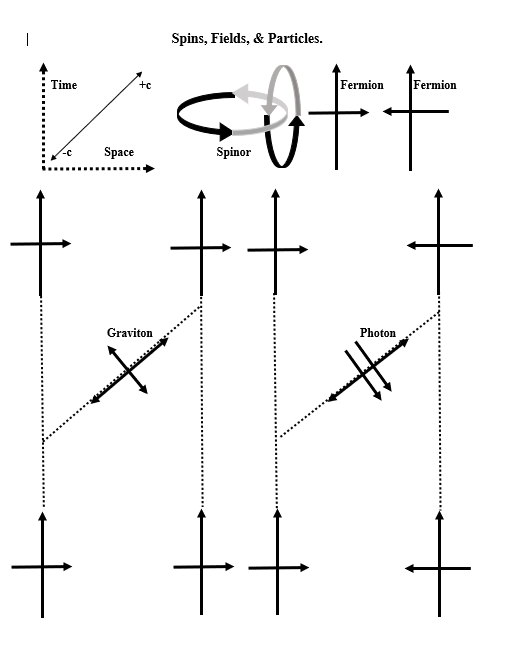 If we consider photons as particle-antiparticle pairs that consist of and carry only units of spin and momentum in a Transactional Exchange, then we can explain not only their behaviour but also the Entanglement they create between matter particles. Moreover, the Graviton appears naturally as a consequence of this scheme. Photons increase the field between matter particles and give rise to exclusively repulsive effects, both emitter and absorber recoil. Gravitons create a diminution of the spin fields between particles to create exclusively attractive effects. Gravitons must have a much lower energy threshold for their creation than Photons, yet their very ease of creation allows them to dominate the large scale structure of the cosmos and creates a web of universal entanglement.

This year’s first visit to our hideaway on a remote Welsh shore provided an opportunity to reopen the Lithonian spaceship yards after the Memsahib found another scrap of ceramic insulation block washed up on the beach. The addition of a few vape components, bits of defunct electric razors and assorted metal scraps has led to the eighth vessel in the flotilla. Lithonian aesthetics decree that only stone and metal go into these vessels. We bin all the damn washed up plastic we can find and carry. 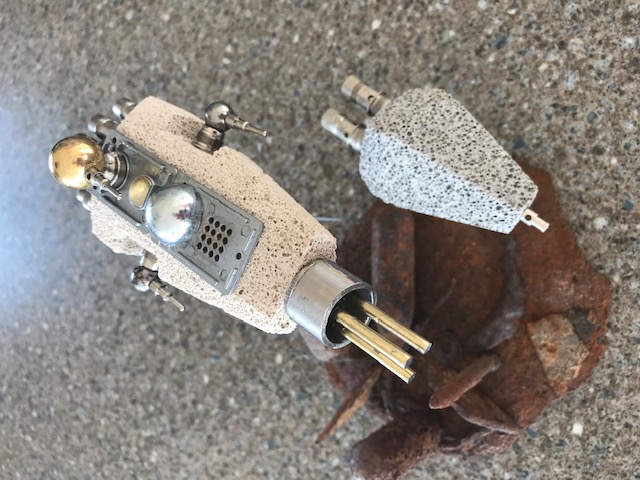