It may take a year or more before possibly decisive cosmological data comes back from the James Webb space telescope, in the meantime back to the problems at the other end of the scale in the quantum realm: -

For many years I have suspected that three-dimensional reversible time can explain the phenomena of indeterminacy, superposition, entanglement, the various characteristics of the quanta in quantum physics, and the phenomena of retroactive enchantment and probabilistic divination in magic.

Yet a problem has always remained, how can a spacetime that appears to us as having one temporal and three spatial dimensions conceal two extra ‘time-like’ dimensions - an additional plane of time that acts like a sort of ‘hidden space’?

If so, then it does not involve any wild new speculative physics but merely a reconsideration of already known physics that physicists generally agreed to ignore, namely the superluminal solutions of Special Relativity and the advanced wave solutions of Maxwell’s equations of electromagnetism.

The people elected Trump and Boris to do similar things: -

To reverse the Economic Decadence that Globalisation has caused in their First World countries through the unrestricted movement of capital and migrants, which has led to diminishing prospects for the indigenous lower and lower middle orders of their societies.

To reverse Social Decadence by reigning back the political correctness, wokeism, multiculturalism and identity politics that the political left has adopted in both countries since largely abandoning class based politics.

The people knew full well that only roguish rule-breaking characters could achieve either of these objectives and they duly elected a pair of rogues.

Covid then intervened, and the conservative-libertarian roguish instincts of both Trump and Boris led to different outcomes. Trump tried to tough out covid and it cost him his second term, even though his other policies showed strong signs of rebalancing the distorted American economy which underlies America’s social conflicts and culture wars. Boris bulldozed through the mess created by the barely decisive Brexit vote and created a viable route forward. Then he took a bold gamble on covid vaccination as his instinct to tough it out no longer seemed a viable option. As a result, Britain will likely become the first country to waive the covid restrictions that Boris so reluctantly imposed on other people.

‘Rules are for the obedience fools and the guidance of the wise’ as the old RAF saying goes.

Although fatality numbers may seem high, the number of covid Deaths per Million in the UK seems moderate by international comparison, for a nation with an old and ridiculously overcrowded population and a non-authoritarian state: -

I do hope that Boris manages to tough out the current media-provoked leadership challenge. Let only those without sin cast the first stone. Let’s face it, during lockdowns most people did whatever they thought they could get away with at their own discretion.

Let us hope that the economic damage of covid does not hamper the rebalancing or ‘levelling up’ of the British economy that Boris intends.

If I had to describe The Esotericon and Portals of Chaos in a few words I’d call it a game plan for a magical life. It consists of a series of psycho-mythological maps of reality, a kabala upgraded to the post-Neoplatonist esoterics of the Pandaemonaeon.

The last few remaining copies of the first edition will soon  undergo a substantial price increase to finally amortise the huge costs of printing and sales of this two kilogram package of an outsize hardcover full colour triple Grimoire and its accompanying deck of altar sized cards. Yes, the artist and I did rather overdo the design specifications and the print bill became enormous, but we made it for posterity and priced it for cost recovery only.

Lockdown provoked a few conceptual breakthroughs in boardgame design. Frontier Space War has evolved into a game so richly complex that you can play it against yourself to create a story, because, unlike chess, by the time you have examined the strategic, logistical, and tactical situation on one side of the board you will have forgotten most of the initiatives you cooked up whilst playing a turn on the other side of the board, The latest version appears here: - https://www.specularium.org/games/item/344-frontier-space-war-4 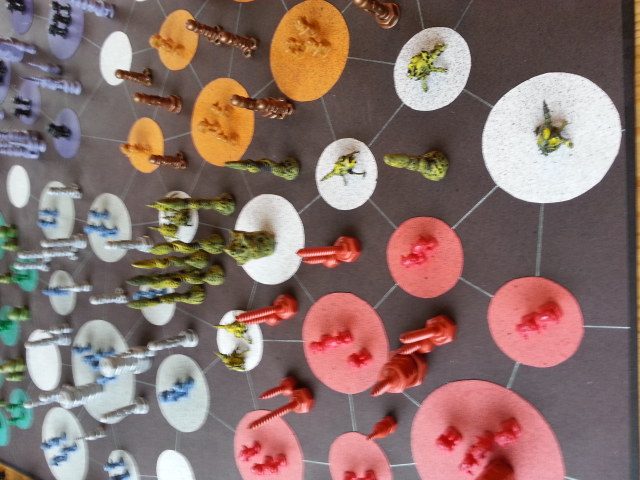 Life itself often seems best regarded as a game played against oneself, or between one’s selves.