Herewith from the halls of Chateaux Chaos the goddess Apophenia atop the festive tree. 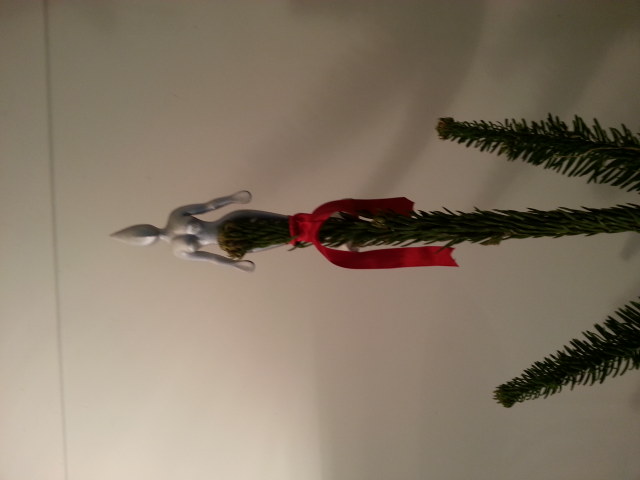 The James Webb Space Telescope should soon set off to take station 1.5 million kilometres from the Earth at a Lagrange point between Earth and Sun. It has cost about twice as much as the large Hadron Collider. I profoundly hope that it launches successfully and deploys its delicate structures as planned, as we do not currently have the ability to fly out and fix it.

I entertain high hopes that observations made by this telescope will lead to the demise of the Big-Bang expanding universe LCDM theory, and the triumph of Hypersphere Cosmology.

The JWST will take long hard looks at galaxies near to the limits of observation because the older Hubble telescope unexpectedly found a vast number of galaxies with many that looked far too well developed to fit into the official Big Bang story.

Hypersphere Cosmology asserts that the universe always remains roughly isotropic and homogenous at all points of space and time. We should find galaxies at all stages of their circular evolution and recycling in every observable region of spacetime.

The universe is closed according to Hypersphere Cosmology, its own gravity curves it back in on itself. That same curvature creates redshift and the illusion of expansion through lensing.

Several other ‘Crises in Cosmology’ already threaten the official Big Bang model; attempts to pin down the apparent expansion rate, the so called Hubble Constant, give inexplicably different results. A recent study of the cosmic lensing of the microwave background radiation strongly indicates a closed (hyperspherical) universe.

With the Hypersphere Cosmology thesis now seemingly complete and awaiting confirmation or falsification, attention returns to Quantum Ontology, what the heck really goes on in the quantum realm that appears to underlie reality?

We have no shortage of Quantum Epistemology; we have the mathematically baroque description of Quantum Field Theory which gives precise predictions in some areas but only probabilistic ones in other areas. It gives very little that we can readily re-express in images or words. Thus, we have a growing suite of Interpretations about what the current mathematical epistemology could mean for the ontological structure of reality – what really exists or how does it do what it does.

We seem in a situation similar to that of the medieval alchemists struggling to understand what happens when we start experimenting with metallurgy and heating and mixing and separating substances, we have developed a very complicated set of rules of thumb but not yet any understanding of the underlying reality (in this case of atoms) which can explain the chemistry involved more clearly than ideas about green and red dragons, peacocks of antimony and phlogiston.

The current suite of Interpretations includes a rich menagerie of weirdness from the many-worlds interpretation, through pilot-wave theory, to reversible-time transactional interpretations, to interpretations with any number of extra spatial and temporal dimensions, to the alternately zen-like inscrutability, agnosticism, or cosmic nihilism of the Copenhagen Interpretation which eschews any interpretation, either because we currently cannot do so definitively, or because either no underlying reality exists, or because it cannot exist in any form that we could possibly understand.

I had wondered if my speculations on quanta as fast rotating multidimensional spinorial toroids seemed an intuitive leap too far but published it here on 2nd June anyway.

Now I notice that the illustrious Gerard 't Hooft published something which seems to explore a similar line of speculation on 29th July.

If god does not play Dice, perhaps she plays Roulette instead, but so fast that we cannot see it.

With the revisions to Liber Null and Psychonaut complete, and with the Occultaris provisionally tucked in as a 20-odd page appendix to Interview with a Wizard, work has begun on a revision of Liber Kaos for a classic edition. This will entail a few upgrades to the opening science sections where science has caught up with magic in the interim. The closing chapters which deal with the contentious matters of grades, hierarchies, temples, and orders, will receive the benefits of a lifetimes experience and some wry observations about what achievements and disasters can result from them.

On the downsides, most of the powerful players copped out of their responsibilities at COP26 and kicked the can down the road. The anthropogenic climate crisis visibly worsened as did the conflicts which it creates. The globalisation of just about everything has brought with it not only creative chaos but also a seemingly uncontrollable surge in entropy. In terms of biological cultures or thermodynamics, the prospects for our current forms of overpopulated overconsuming civilisation do not look promising.

On the upsides, the pandemic has put the Scottish Independence fantasy on hold, where more careful reflection upon its multiple fallacies quietly erodes it. The same goes for anti-Brexit sentiment, the EU has responded poorly to covid, Belgium, the rotten heart of the EU, has some of the worst pandemic figures on the planet.

The pandemic has brought home to many just who and what matters to them. Introverts with a rich inner life have generally fared better than the extroverts that our culture and media favours. For many of them lockdown has proved an annus mirabilis in terms of the appreciation and production of ideas, literature, art, and science. Lockdown economics has demonstrated that we could in principle, and with a bit of redistribution, easily thrive on a lot less work and consumption.