The Chancellor of Arcanorium College confers the degree of Bachelor of Magic upon Jacob Edward Sipes, BoM.

This represents the first degree awarded by Arcanorium College since its inception.

Many have started on this demanding course, but few have had the determination to persist with the exceptionally demanding work.

The full citation appears in the Arcanorium College Department of Magic pages on this site.

The Hypersphere Cosmology model now seems to have achieved its final form: -

The model presents two observational tests which could show whether this model or the conventional Lambda-CDM Big Bang model best represents the universe. Unfortunately. both tests would take about forty years of observation, but presently Hypersphere Cosmology has the edge in terms of Occam’s Razor as it offers a considerably simpler and more elegant description of the universe.

All attempts to falsify this model will be enthusiastically engaged with.

In the meantime, work resumes on Hypersphere Mechanics, an attempt to rationalise the ad hoc mess of Quantum Field Theory and add some mathematical and conceptual rigor.

The ingredient list from which an improved model may evolve currently includes the following: -

A spacetime of three spatial and three temporal dimensions, and the whole metric curved by gravity into a spatio-temporal 3-3 Sphere.

Spherical rotations of various of the dimensions of spacetime itself as the basis of all fields, forces, waves, and particles.

Quanta as having some of the properties of hyperspheres. Mach’s Principle, as above so below, the quanta and the universe somehow mutually define each other’s properties.

Matter ‘particles’ and ‘anti-particles’ as the points where waves which travel right round the universe interfere, a sort of hyperspherical extension to Milo Wolff’s Wave Structure of Matter theory, but to include nuclear and gravitational effects as well.

Energy ‘particles’ as ‘particle-antiparticle’ exchanges with the antiparticle component traveling backwards in time, as in Cramer’s Transactional Interpretation of Quantum Physics.

The appearance of entanglement and superposition arising from retro-causation at lightspeed.

A possible geometrical relationship between neutrinos, photons, and gravitons.

The hypothesis that something out there might know more than we do, and that it might respond to the name of Azathoth. Common sense need not prove a limitation to imagination. 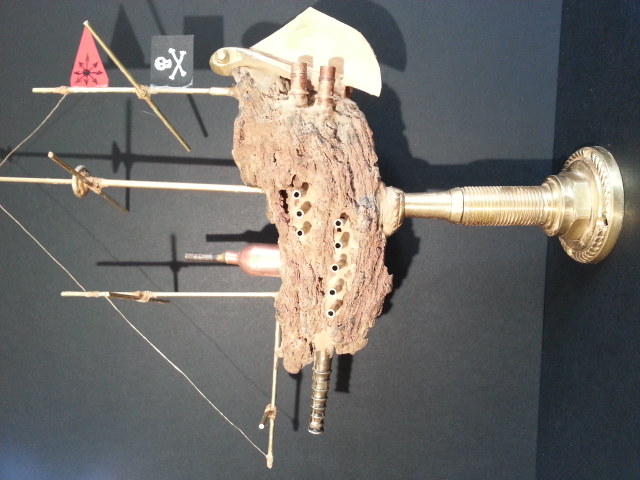 The hull of this vessel does not consist of a heavily decayed piece of timber, it consists of a piece of hard volcanic lava scrounged from Mount Teide on Tenerife that inspired the overall design. The assorted fittings come from the junk boxes in the sheds and outhouses of Chateaux Chaos. The policy of never throwing any interesting piece of scrap away has paid dividends during lockdown.

In the backstory the Imperium abandons a damaged robot freight vessel on a desolate asteroid. The AI that piloted it uses its droids to gradually assemble a functioning craft from the wreckage of the freighter and the material of the asteroid. The AI also reprograms itself in increasingly unorthodox ways, drawing on historical archive material in memory devices in transit, resulting in the antique design of the ship and the new rogue identity of the AI.

The Edward Teach now raids the far-flung outposts of the Imperium, relieving merchant vehicles of their cargoes, attacking some of the smaller classes of Imperium warships, and adding to its arsenal of strange and exotic weaponry. 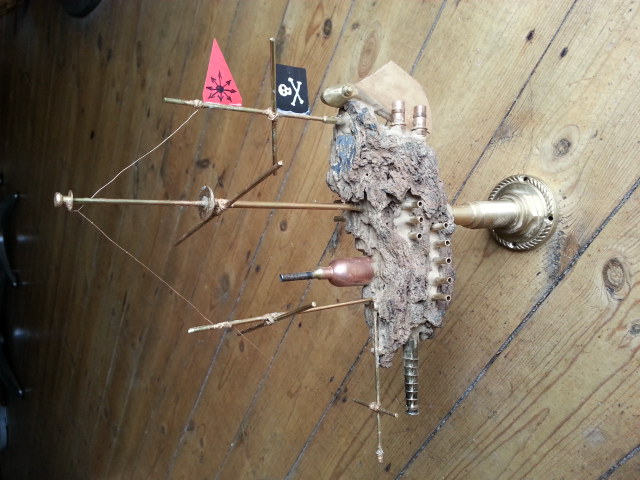 Regional Nationalism. Tony Blair remains one of the most reviled Prime Ministers of recent decades, we remember him mainly for the deceitful case he made for the Iraq war and the disastrous war itself. He managed to hand over power to Gordon Brown just in time to escape the economic catastrophe of 2008 that his policies during three terms of office did so much to exacerbate.

However, he also lit the fuse to constitutional crisis by setting up the Scottish and Welsh assemblies. It might have seemed like a good idea at the time, Northern Ireland had been given a gerrymandered assembly to try and persuade rival factions to talk more and fight less. Scotland and Wales were given their own assemblies in the hope that it would make the Northern Ireland assembly seem less of an anomaly and that it would head off Scottish and Welsh nationalism, despite that such nationalisms had rarely risen above a hobby activity for a minority of Celtic romanticists.

It has had quite the reverse effect, both assemblies have now self-designated themselves as the Scottish and Welsh Parliaments and Governments. The Welsh had little initial enthusiasm for an assembly, but now both assemblies have filled up with left dominated representatives spending central government funds and playing the nationalism card as a career strategy. Blair created a career opportunity for a new class of regional-nationalist politicians, and they took it, pulling the wool over the eyes of their electorates.

The nationalism cards do not bear scrutiny, they have little written on them except a faux resentment of England which heavily props up both principalities economically on one side. On the other they merely say, ‘We demand ever more regional subsidies!’ Nowhere do the nationalism cards mention anything realistic about what independence would mean in practice. Economy? Central Bank? Currency? Borders? Defence? National Debt?

Bristol has a longstanding tradition of political rioting, and it now leads the way in protesting against a new parliamentary bill which restricts the right to peaceful protest. Basically, if your protest is likely to cause an obstruction or a nuisance you will not get permission for it.

History shows that peaceful unobstructive protest achieves nothing. A million people marched quietly through London against Tony Blair’s planned war in Iraq, and it went ahead anyway. A quarter of that number smashed up central London against Margaret Thatcher’s Poll Tax and it was immediately cancelled.

A protest that inconveniences nobody influences nobody. Expecting people to protest for the right to make a nuisance, without making a nuisance, seems a ridiculous expectation.

If he persists with it, this may become Boris’ Poll Tax moment.