An enthusiastic correspondent has started putting together an online forum for THE EPOCH OWNERS CLUB, in which participants can discuss their work and experiences with it. I have had a look at the layout and format. It looks good and I will participate when he declares it open. Watch this space for further details.

Note the non-quantitative nature of the entire Oat Cuisine Range. Cooking becomes so much more intuitive and creative and fun without measurement. After a hard day’s painstakingly accurate cosmological and quantum hypersphere mechanics, sculpting and cooking by eye comes as blessed relief.

Oil up a shallow baking tray and heat an oven to about 200 C. Mix porridge oats with about a fifth flour and a dash of oil, and add anything savoury to hand, like grated cheese, herbs, pepper, seeds, spices, etc. Stir in a little water till the mixture becomes a thick paste. Spoon dollops of the paste onto the baking tray and squish them flattish. Bake for about a quarter of an hour or until agreeably brownish and crispy. Delicious and fortifying, hot or cold.

The nest cone and base consist of some sort of lightweight building composite that washes up here, and which grinds away easily against flat stones or bits of scrap metal. The termite towers consist of lengths of sea rusted iron rod. The spidership started off as a grapnel fishing weight, a covering of araldite smeared all over it provided a surface which when gone over with a thick black marker came out with an insectoid sheen.

Life on earth only tried high intelligence comparatively recently. For billions of years it experimented with other strategies like giant reptilian bodies, aerial flight, and hundreds of millions of species of insect. Will the high intelligence strategy pay off? The most ‘intelligent’ species that has so far evolved has already done spectacular damage to most of the rest of life on earth. The so called Anthropocene (Human created) Mass-Extinction of other species proceeds at a terrifying pace, we have ripped up the earth and polluted the land, the skies, and the seas, and our numbers seem set to grow by billions more who will want gigatons more of everything.

Covid 19 looks like the biosphere taking a swipe at a rogue species, not a particularly vicious swipe because it probably won’t kill more than a mere one percent of us, but it could do much worse next time.

High intelligence seems a risky strategy for life on earth to pursue. In the long term it will only pay off if the high intelligence species manages to plant life from earth in other star systems. Otherwise life on earth will probably have shortened its own life expectancy by trying this experiment, unless the ‘intelligent’ species becomes truly intelligent. 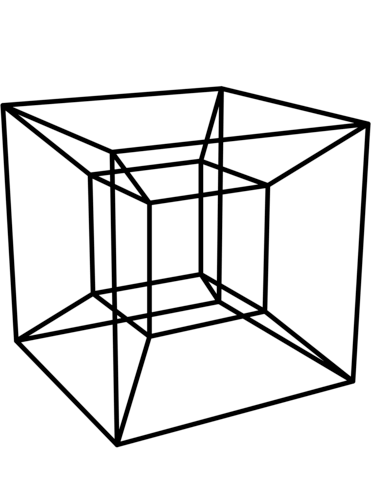 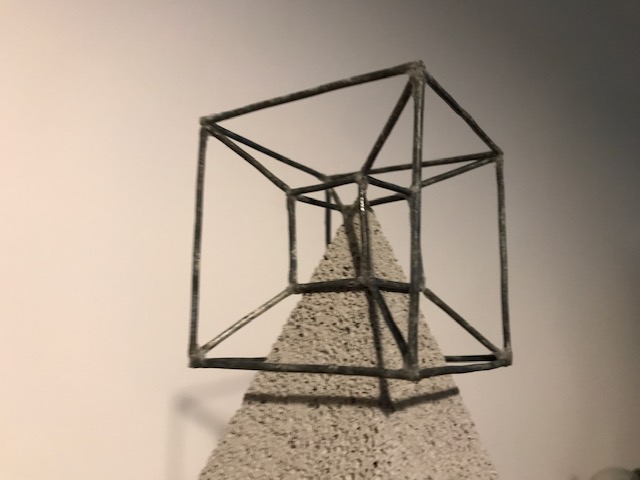 (Scrap wire and superglue, the araldite having run low, the whole perched on a spare pyramid,)

A hypercube can assist with the visualisation of the geometry and topology and rotation of a hypersphere in both cosmological and quantum contexts.

The hypercube consists of a four-dimensional cube, and it has many possible perspective representations in the 3 spatial dimensions that we can perceive.

Some preliminary thoughts on the applicability of hypersphere mechanics to cosmology and particle physics now follow: -

The 4-dimensional hypercube, sometimes also known as a tesseract, also has the mathematical name of an Octachoron as it has eight cubic cells. The eight cubic cells appear in the above model as the more obvious inner and outer cubes and the less obvious six truncated pyramids that join the inner to the outer cubes. In this 3-dimensional representation these six cubes become distorted by perspective into truncated pyramids. In a real four-dimensional cube, all eight cubes have the same size, so perspective has also made the ‘outer’ cube appear much larger than the ‘inner’ cube.

The Octachoron has the usual x, y, and z axes of a cube and of 3-dimensional space, and its fourth spatial axis w corresponds to the ‘diagonals’ joining the ‘inner’ and ‘outer’ cubes. In a hypersphere the fourth spatial dimension w will appear to 3-dimensional observers as a curvature or an acceleration.

This makes the Octachoron a useful visualisation tool when considering the dynamic behaviour of a hypersphere which we usually represent in three dimensions as either a point surrounded by a spherical surface representing the antipode of that point, or as two spheres of equal size with every point on the surface of each sphere in contact with a corresponding point on the other, (imagine them rolling all around each other) and the centres of each sphere representing the observer and the observer’s antipode.

Visualising the rotations of a hypersphere remains exceptionally difficult as it has no obvious planes or edges to act as reference points. However, the Octachoron does provide a model of four-dimensional closed space which also comes with built-in three-dimensional Cartesian axes x, y, and z, corresponding to the edges of the undistorted ‘inner and ‘outer’ cubic cells.

As these videos show, rotating an Octachoron through a plane of one of the x or y or z directions and the fourth-dimension w, turns it inside out and back again: -

The following diagram shows a side view of an Octachoron undergoing an 1800 rotation about a wx plane from one end of the diagram to the other. Note than in addition to turning the figure inside out, the rotation also turns each cell into its mirror image.

Using the quaternion algebra of rotations, we can equate an 1800 rotation with i2 as it inverts the figure (i2 = -1).

if we equate i, j, and k with a 900 rotation about the wx, wy, and wz planes then a 900 rotation simultaneously about each will completely invert the Octachoron or Hypersphere and turn it ‘inside out’ and into its mirror image, a further 900 rotation of this kind will restore the original configuration. Note that each rotation can have two possible directions designated + and -, or r and l. Such rotations about three planes simultaneously only work as above if they all have the same direction.

This triple rotation involving the w axis would appear in three-dimensional space as a spherical wave traveling either inwards or outwards depending on its sign. It may explain the origin of gravitational and electromagnetic and perhaps nuclear fields. On the cosmological scale it provides a model for the hyperspherical vorticitation, the special kind of rotation which prevents the cosmic hypersphere from collapsing under its own gravity.

Now all fundamental particles have a measurable Spin corresponding approximately to rotations in three dimensions by rotation about a single xy, xz, or zy plane. The somewhat peculiar nature of this Spin may arise from its origin as an isoclinic double plane spin such as xy/wz.

In addition to Spin, fundamental particles can also have one or more of two properties which can come in THREE possible ‘strengths’ viz-

Plus, fundamental particles can in principle have one of three possible Nuclear Charges (designated red, blue, and green (or their anti-colours)) although only composite particles exhibiting all three or a charge - anti-charge configuration have any kind of stability.

Now if time has three dimensions rather than just one as commonly assumed, and all three lie mutually orthogonal (at right angles) to each other (as with space), then the two time dimensions orthogonal to the direction of observation used by an observer constitute an imaginary time plane corresponding to probability lying at right angles to time. Imaginary time would constitute a sort of ‘Pseudo-Space’ by the Minkowski formalism that counts time as an imaginary space.

As the two axes of pseudo-space, which we can designate u and v, must also lie mutually orthogonal to all the spatial dimensions x, y, and z, a number of further rotational possibilities and degrees of freedom become possible, viz-

Between them these ‘exotic’ spins may somehow account for the electromagnetic, nuclear, and generational charges of fundamental particles.

Work continues………… I put this out there to see if it ignites any sparks.