Some recent correspondences seem to have led to some thoughts perhaps worth noting for posterity in an extended ramble: -

I spent my formative years on the late hippy scene, 1974-1980. Subcultural trends in the UK tended to run on social class, the hippies mostly came from the upper middle and middle classes (I came from the upper working class but going to university promoted me to lower middle class). Hippy-ism had a strong mystical component and a relaxed attitude to material success because the economy had plenty of slack in it at the time. The Punk movement came later, mostly from the upper working class and the middle working class, and it seemed angrier and more violent, partly because of social and political conditions at the time, views had become polarised and economic life had become more competitive. Thank Margaret Thatcher.

The antinomianism of Chaos Magic did attract a fair bit of interest from the Punk generation, though - they liked its rebelliousness.

Looking back, I now realise that the part of traditional occultism I rejected in forging Chaos Magic comes down to one main thing - Neoplatonism, and I rejected that because of my scientific education. I don't find the theory of earth, air, fire, and water useful, and I don't believe that gods and entities exist independently of the human mind, however I do believe in the psychological and parapsychological power of intent and imagination. Thus, we can make gods and demons to assist and serve us. I attempted to supplant the Neoplatonic-Pagan-Monotheism which had underpinned occult thinking for two millennia with a Quantum-Neo-Paganism.

Chaos magic also developed by defining itself as against Crowley and Thelema. We can do better I proclaimed, (but few of them did).

I would agree with the observation, that you need to keep your feet on the ground with a well-crafted Solar persona whilst pursuing the Ouranian quest. I never gave up on the day career and 'normal' life; or on the weird quest either. I think that benefited both.

The enlightenment and radicalism of the age become the oppression and conservatism of the next age.

Now history happens so fast, and people live so long, that this can happen twice in a single lifetime.

(Social liberalism and political correctness went toxic and authoritarian in my own lifetime, vociferous minorities now seem to set the culture war agenda.)

They used to say that human progress happens one funeral at a time.

Today your ideas can die before you do.

Consequently, I have given up following fashions in ideas and in science, art, and morality.

Does that make me a conservative or a radical?

‘Orthodox Chaoism’ now dominates all magical thinking in the westernised world, its influence seems pervasive, the remaining pockets of Neoplatonism seem untenable. I don’t deserve all the credit for this, I saw the way the wind blew and simply hoisted more sail and puffed into it. I don’t feel the need to promote or defend Chaos Magic further although I use it constantly. According to Aeonic Theory it will remain the prime esoteric paradigm until something of a yet barely imagined transcendentalist way of thinking supersedes it. (Some form of mystical ecology might do just that.)

For the remaining part of this incarnation I have two esoteric quests, to replace the conventional cosmological model of a big-bang origin for this universe with something more credible that better fits the unadulterated observational data (like Hypersphere Cosmology, in progress), and also to make some sense of the quantum and particle domain underlying reality, using perhaps 3D time (progress slow, I may not live long enough to finish this).

I find the apocalypticism of the current scientific creation myth as metaphysically unsatisfactory as the apparent lack of an underlying reality in the quantum domain.

I seem to have become an esoteric conservative and a scientific radical, with leanings towards social conservatism as I observe the increasing social decay in my environment. Whilst the upper echelons and intelligentsia of western societies could usually cope with some indulgences in recreational sex and drugs, the effect on the lower orders and the ignorati appears increasingly catastrophic.

Humans tend to adopt the culture that nurtures them because our high intelligence also brings with it a hyper-suggestibility. We tend to end up believing what we do rather than doing what we believe. Politicians and priests have always known this, make people do something or make people use some form of thought-speak and their beliefs will follow sheepishly behind.

Personally, I do make value judgements about cultures; some religions and polities do seem to spawn quite ghastly, ignorant, and inhuman behaviour, irrespective of the ethnicities involved.

So does the following assertion count as racist or culturalist?

Yes, I have encountered many people who find working for German bosses odious - one of the reasons I think we should exit the EU before we all end up working for them!

The further we investigate the recent history of cosmology the more apparent it becomes that the baroque mess of the currently dominant Lambda-CDM model has its roots in assumptions made back around AD 1930. Today it has become difficult to even find observational data that hasn’t undergone deformation by the expansion hypothesis before presentation.

A extract of Hypersphere Cosmology in progress follows, Section 9 which shows an upgrade to the hyperspherical lensing which eliminates dark energy (Lambda). 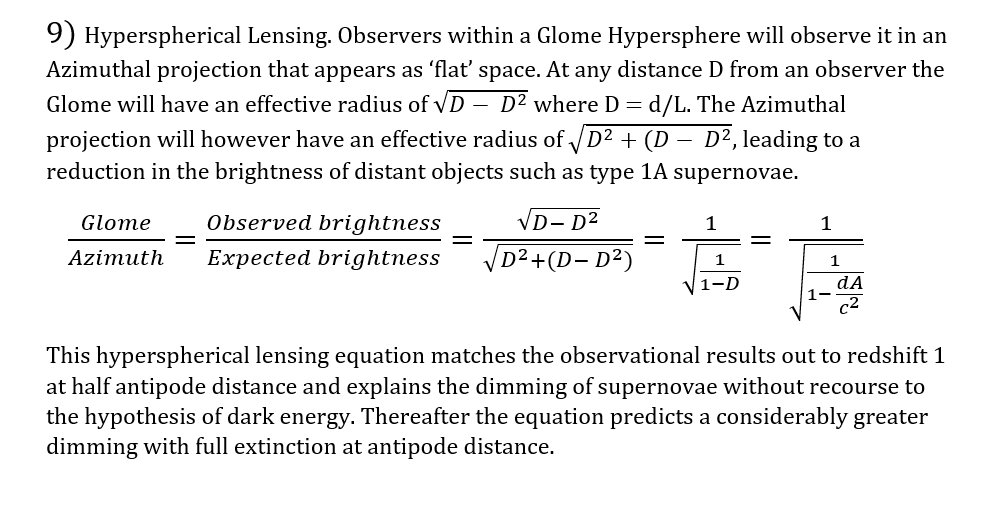