A Glome in Azimuth. Featured

Since humanity first gazed up at the stars we have wondered - how big a universe do we inhabit and what shape does it have? Does it have infinite extension in space and time, or does it have boundaries, and if it has boundaries what lies beyond them?

In the twentieth century we reached several consensus conclusions by interpreting newly available data provided by powerful telescopes of various kinds, including those that could ‘see’ forms of light and radiation that our eyes cannot detect.

Some of these consensus conclusions remain questionable.

The universe appears vastly larger than we previously thought. As light travels at a constant 300,000 kilometres per second then the furthest detectable sources of it seem to lie further than 10 billion light years away from us and the light from them has travelled towards us for  as many billions of years. There seems little doubt that we inhabit a very large universe with very long history.

Around 1930 a consensus developed amongst cosmologists that the universe has expanded continuously from an initial condition of having no size at all, and that the sources of light we can observe at extreme distances now lie much further away than ten billion light years. The consensus theory of a universe expanding continuously from a ‘Big Bang’ has dominated cosmological thinking for nearly ninety years but it has led to utter confusion and the multiplication of a swathe of questionable sub-hypotheses which attempt to prop it up, such as singularities, cosmic inflation, dark matter, and dark energy. These sub-hypotheses complicate estimates of the age and size of the universe. The current consensus guess puts the supposed big bang about 13.8 billion years ago.

This paper considers proposition that the universe does not expand and that it has a shape in space and time quite different from what the expansion hypothesis suggests.

The Hypersphere Cosmology articles and papers on this site show how we can quite easily avoid the phlogiston like ‘phenomena’ of singularity, inflation, dark matter, and dark energy by simply dropping the expansion hypothesis and describing the universe as a Vorticitating Hypersphere finite but unbounded in both space and time. In this model the phenomena conventionally explained by the presence of dark matter (galactic rotation curves) and dark energy (an unexpected dimming of very distant sources) all arise as a direct consequence of the geometry of the hypersphere.

‘Hypersphere’ can refer to any form of sphere that has more than three dimensions, in Hypersphere Cosmology it refers specifically to a geometry that mathematicians describe as a 3-sphere or a 4-ball, it also has a particular name – a Glome.

So, if we inhabit a Glome, what shape will it appear to have to us observers inside it?

Because light itself follows the gravitational curvature of space (and a Glome curves back in on itself due to its gravity) we will see the universe in Azimuthal Projection.

(The Azimuthal Projection creates the optical illusion of spreading out and dimming light from very far sources, the model does not require dark energy to explain that.)

We can visualise Azimuthal Projection fairly easily. Imagine that you stood on the north pole of the earth but that the earth had such immensely powerful gravity that light could only travel around its surface. From the north pole you would see the equator as a circle surrounding you because light would travel around the curve of its surface. If you looked further you would see the south pole in very direction around you, stretched faintly around the entire horizon. It would look like this because we always assume that light travels in a ‘straight line’.

See this Azimuthal Projection of the earth for an observer at the north pole. 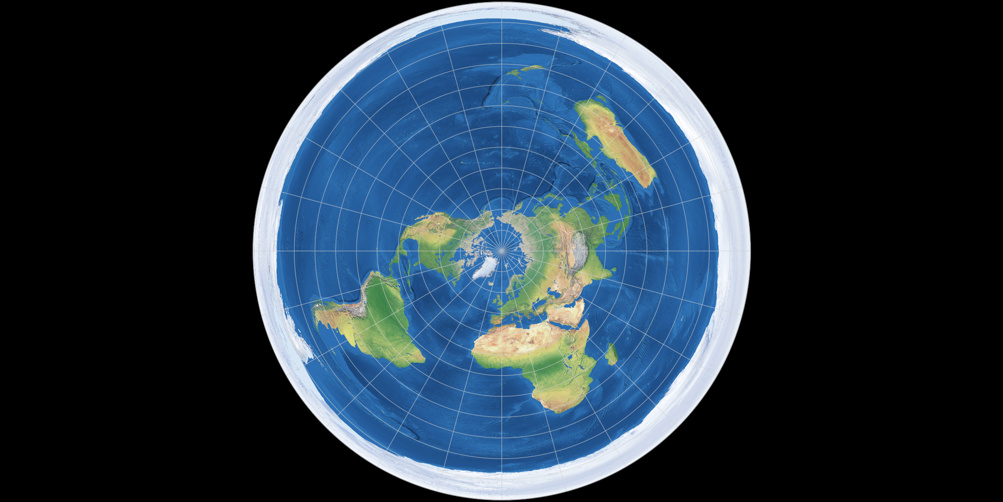 Now in three dimensions something analogous occurs if the gravity of the system (the spacetime curvature) has the strength to bend light right around it. You will see the antipode (the point at the opposite side of the universe to you) spread out faintly as a complete spherical surface surrounding you, billions of light years away.

(You might think that at twice that distance you could theoretically see yourself, but the spacetime curvature redshifts light to oblivion beyond antipode distance.)

So, on the basis that we inhabit a Glome in Azimuth, my astronomer/cosmologist friend and I now seek the precise equation for the unexpected diminution of luminosity at extreme distances which will kill the dark energy hypothesis and put the final nail into the coffin of the Lambda-CDM model and all other variants of Big Bang theory.

Einstein got it more or less right the first time, he should never have listened to Lemaitre.

As the autumnalis Mandrakes in the greenhouse prepare for their summer hibernation and their leaves begin to yellow, the frogs and toads move into the pond at Chateaux Chaos and the flowerbeds begin their slow magnificent explosions. Everything seems a bit early this year after the unseasonably warm February.

My attempt to fashion a mermaid from concrete over scrap steel and wire using rather stochastic procedures, (whatever comes to hand and mind), seems to evolve towards an image of Sabrina, the bountiful but fierce goddess of the nearby River Severn. Or does she look like Britannia with that trident? 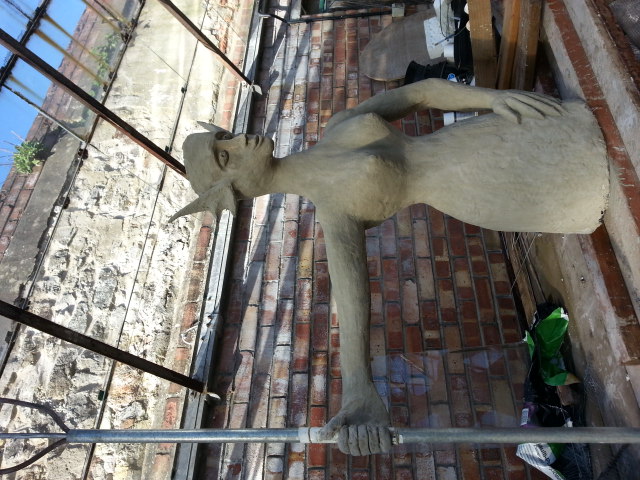 Brexit seems to hang in the balance. Will we finally summon the resolve to exit the perfidious undemocratic synarchy that the EU has become, or will the self-interest of the euro-political class and big business triumph and intimidate the electorate into accepting a partial Brexit fudge or no Brexit at all?

Good fences make good neighbours as they say, but they become even more essential when you haven’t got particularly good neighbours. If we had not got duped into joining the EU, we would certainly not want to try joining it now.

Read 2401 times
More in this category: « The Way of the Wand The Hyperspherical Lensing of a Glome in Azimuthal Projection. »
back to top
› ‹
feed