The Way of the Wand Featured

I received an invitation to write a piece for publication in Japanese in a Japanese journal of Magic. I present it here in English.

The Way of the Wand.

Religion seeks knowledge and power through the understanding of the will of Supernatural Agencies.

Science seeks knowledge and power through the understanding of Natural Mechanisms.

Magic seeks knowledge and power through the understanding of Intents – personal intents, the intents of others, and the intents of natural phenomena.

On a superficial level, all three disciplines loathe and despise each other. Scientists dismiss the existence of supernatural agencies and the existence of intents (including free-will). Religionists loathe and despise the reductionism of scientists and regard the hubris of magicians as evil and blasphemous. Magicians consider science incomplete and regard all religious ideas as rather arbitrary vehicles for Intent.

Many people who express an interest in Magic only really want the consolations of religion and mysticism and something ‘spiritual’ - whatever that may mean.

If spirituality means ‘the way you live your life’ then Magic certainly has its own ‘spirituality’ – ‘Living your life by Intent’ - making things happen by all available means.

We should not confuse Intent with ‘willpower’ as in some early 20th century definitions of Magic. Both willpower and Intent arise from Imagination. The capacity to imagine what you want, consciously and subconsciously, and the imagination to build on that to the exclusion of other needs and wants and fears and distractions, leads to the knowledge and the power of Intent.

One thing marks out Magicians from the Scientists and the Religiously inclined. Magicians constantly practice Enchantment; they cast spells all the time. They may also practise Divination, the attempt to divine the intentions of people and events, or Invocation, the attempt to draw inspiration from imaginary supernatural agencies or their own sub-consciousnesses, or Evocation, the attempt to control the intent of imaginary supernatural agencies or their own sub-consciousnesses, but Enchantment remains the defining activity of a Magician.

For this reason, effective magical training programs always start with Enchantment and the use of wands and spells and sigils. Only those who truly ‘pick up the wand and run with it’ will ever master the life skill of Magical Intent. The rest will just end up toying with tarot cards and the like and creating their own idiosyncratic mysticisms and religions.

A Magician can do Enchantment without a literal physical magic wand, in the same way that anyone can do simple carpentry with their bare hands by breaking and twisting small pieces of wood together, but precision instruments give better results.

As the traditional instrument of Enchantment, the Wand serves several purposes; the magician can use it to focus more intently when drawing spells and sigils in the air, or in the mind’s eyes of imagination and visualisation. Wands also serve to constantly remind Magicians of their chosen vocation to Live their lives by Intent, whatever the distractions and blandishments and fears and conventions of contemporary life.

A Magician should always make Wands that represent personal intents and meanings. Two Wands will often suffice, a large one in the form of a staff of the Magician’s own height for use in private or special places, and a smaller pocket wand for carrying always. Magicians should consider upgrading their wands continuously during their careers as their skills and knowledge and intents develop.

A Wand does not even have to look like a conventional Wizard’s wand. Some Magicians have successfully defined special objects in the shape of rings or amulets or even weapons as their Wands.

Magic does not always work, but on the other hand Religious appeals to supernatural agencies work even less well, and Science frequently fails to do what we want it to because we inhabit a universe with a lot of randomness in it. This randomness has two consequences for the Magician, it makes Enchantment possible, but it also renders Divination subject to probability.

If only a fifth of your spells work or you find that you can only achieve a twenty percent distortion of probability, then you still have a real power that with persistent and subtle application will yield good results. If, however only a fifth of your Divinations give the correct answer then you will acquire a disability if you act upon them.

Additionally, because of the existence of randomness and probability, Enchantments work best when aimed well into the future whilst Divination gives better results over shorter times, so as I always say, whenever possible - ‘Enchant Long and Divine Short’. Of course, Magicians would prefer to Enchant and get a result quickly and to have the ability to Divine the distant future, but the chaos and randomness in this universe which makes Enchantment possible makes these acts difficult.

Taking the Way of The Wand means living in a universe of Intents and challenging yourself to succeed at difficult activities that require some sensitivity to the Intents of others and the Intents of human made systems and the Intents of physical reality, as well as a quiet self-confidence and a well disguised supreme arrogance.

Magicians rarely succeed in working together for long. Rivalry tends to become enmity. Magic tends to become a solitary pursuit shared only through books and manuscripts and letters. Humans tend to revile or ridicule or fear those who advertise themselves as Magicians in Science based cultures, and in monotheist Religious cultures, and not all Pagan cultures have regarded it favourably. Magic thus tends toward discretion if not outright secrecy.

Nevertheless, many magicians smile quietly when they notice ordinary people inadvertently using magical thinking quite successfully. Belief in the power of Intent and belief that all phenomena have Intents does often give good results, even if Science believes otherwise and denies even human free will. Believing in Intent seems an indispensable element in the human toolkit but use it with care and with a carefully crafted Wand for best effect.

Ordinary people seem to recognise the power of Intent but so often see to shy away from it out of fear about where it might lead them. It does have its dangers, but the Magician decides To Know, To Imagine, To Dare, and To Keep Silent.

A correction to all versions of Hypersphere Cosmology.

Since I started collaborating with a gamma-ray astronomer on the Hypersphere Cosmology hypothesis we have started checking the math in fine detail. The precise formula for redshift appears below, previous versions gave only its square root. 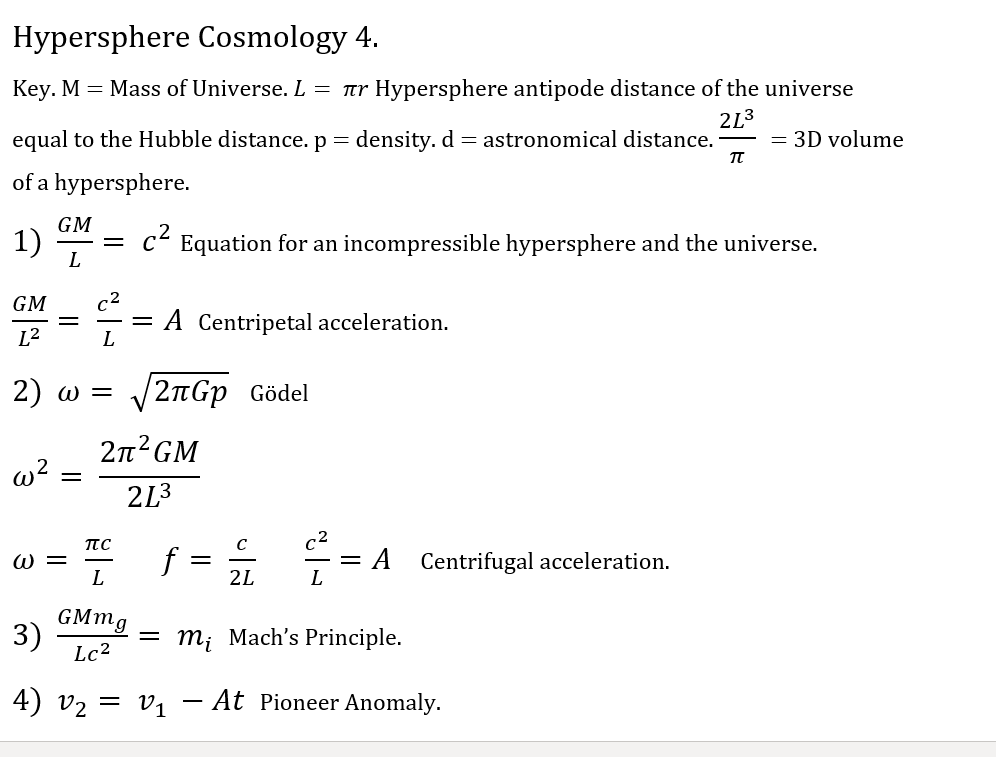 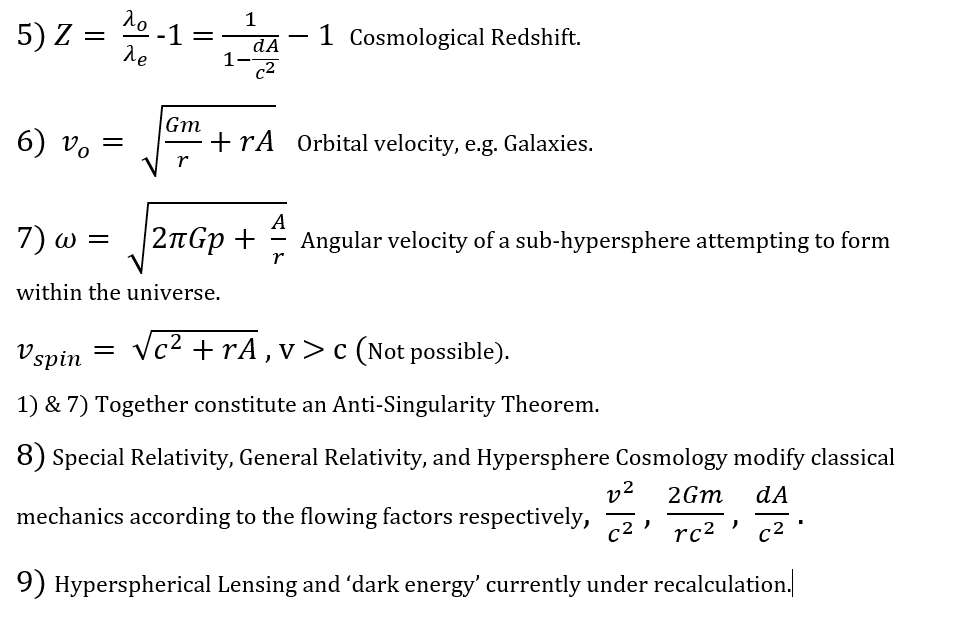