Herewith the full form of the equation for the rotation of a cloud of objects like the galaxies scattered through the universe or a cloud of particles that could become a black hole. The extra bits inside the brackets account for the degree to which the spacetime curvature has a flat Euclidean or a positively curved hyperspherical geometry: -

For the case of a hypersphere forming within the great hypersphere of the universe the equation reduces towards: -

This looks like splendid news, black holes will not remain indefinitely stable, as they contract towards hyperspheres the vorticitation of the great hypersphere of the universe itself will spin them to gradual destruction, returning material to space, and singularities will not occur.

Reading ‘The Shortest History of Germany’ by Lanes Hawes

Might lead one to conclude that all the bad stuff about Germany originated from east of the Elbe. This thesis at least has the virtue that Prussia doesn’t exist anymore, so nobody will take offense today if all the blame gets heaped on the Prussians.

However, I got a different perspective from another book: -

The Strange Death of Europe Immigration, Identity, Islam. By Douglas Murray makes a strong case for the almost total incompatibility of Islamic and European values. Islamists would undoubtedly agree. That probably comes as no surprise to anyone except the most deluded of Europe’s extremist liberals.

However, Murray makes some fascinating observations about European (mainly German) philosophy in Chapter 13. Some decades before the British Darwin released his bombshell thesis about Evolution, German academics had already begun the process of undermining Christianity by performing Historical Criticism of the Bible itself, demonstrating that it consisted of mythology not history.

Then cresting the wave of triumphant Humanism, Germanic philosophers in their bloody-minded pursuit of no-compromise, un-nuanced absolutes went on to create some astonishing triumphs and disasters. Perhaps this arises from their language which seems to have evolved for shouting unequivocal orders in forests.

My non-exhaustive list of Germanic achievements illustrates this style of thinking in which: -

‘If X; then Y must follow, absolutely, unambiguously, unarguably, authoritatively!’

Religion. If worshiping God does not give good results, then we must sack the people who organise the worship. Luther. (Only half correct, we needed to sack God as well.)

Historical Criticism. If the events narrated in the Bible do not match what we know of history then we must regard the Bible as mythology and god as dead. Eichhorn, etc. (Trebly correct.)

General Relativity, if we cannot account for the equivalence of gravity and acceleration in Euclidean space and time then we must have curved space and time. (Still correct.) Einstein.

If no god exists to justify inequality in society then a dictatorship of the proletariat must enforce equality. Marx. (Correct then wrong.)

Mind (and Soul?). If the mind and soul do not act in a coherent way, then we must throw away the idea of their singularity and consider them as component based. (Still roughly correct.) Freud, Jung.

If no god exists, then a Darwinian struggle for the triumph of the will must follow. Nietzsche, Hitler, and multiple culprits. (Correct then badly wrong.)

If philosophy means word-wisdom then we must pull the words apart until no meaning, value, or wisdom remains. Nietzsche, Heidegger, Husserl, Wittgenstein, Feyerabend. (But French postmodernists also guilty.)

If big means better, then one currency must fit all sizes (particularly ours), and ever closer political union of the small to the big must follow (towards us). German thinking on the EU. (Wrong on all counts.) 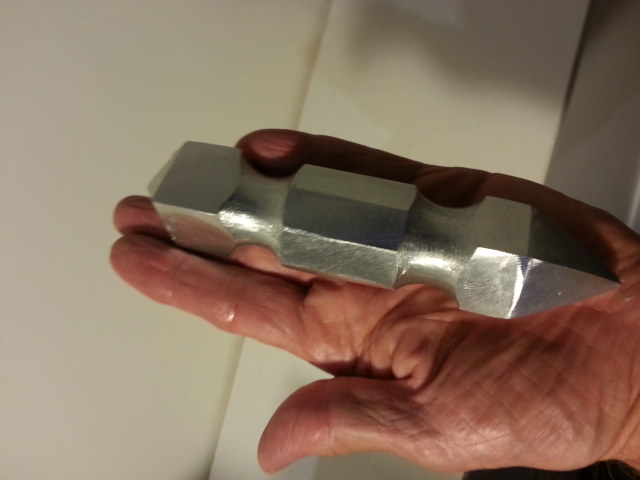 Methinks a magician should create a new wand every few years to mark the acquisition of fresh knowledge, abilities and objectives.

Loosely based on the Tibetan Purba style of wand, hand carved from a solid bar of Aluminium (the metal of Ouranos) it facets represent the major phenomena of the Chaobala. The square pommel for the classical elements with the pyramidal end for aether. The octagonal midsection shows the eight planetary divisions of the psychocosm, and the pentagonal point represents the elder gods.

Consecration by, among other things, 23 hours work and the sacrifice of 5 engineering files.

Engraving the facets with the appropriate symbols remains an option, technical recommendations appreciated.

Six and a half years on since the planting of three seeds sent by a magician in Greece, one of the Mandrakes (Mandragora Autumnalis) has finally flowered. They don’t seem to enjoy the climate here but maybe this unseasonably hot British summer changed her mind. 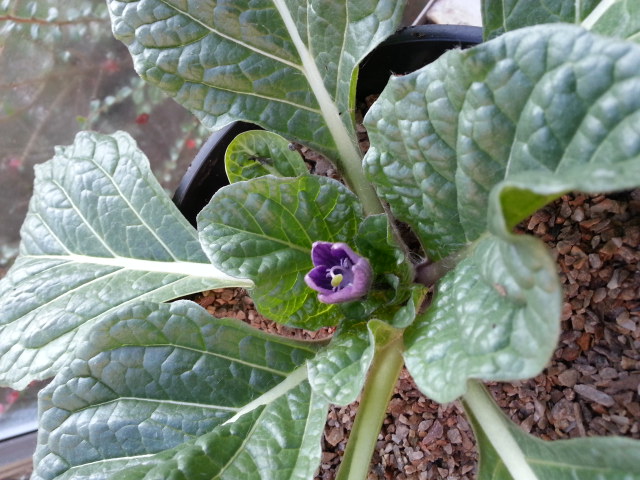 Rewilding this species in the UK will plainly take some time….. but climate change must surely have some small upsides.