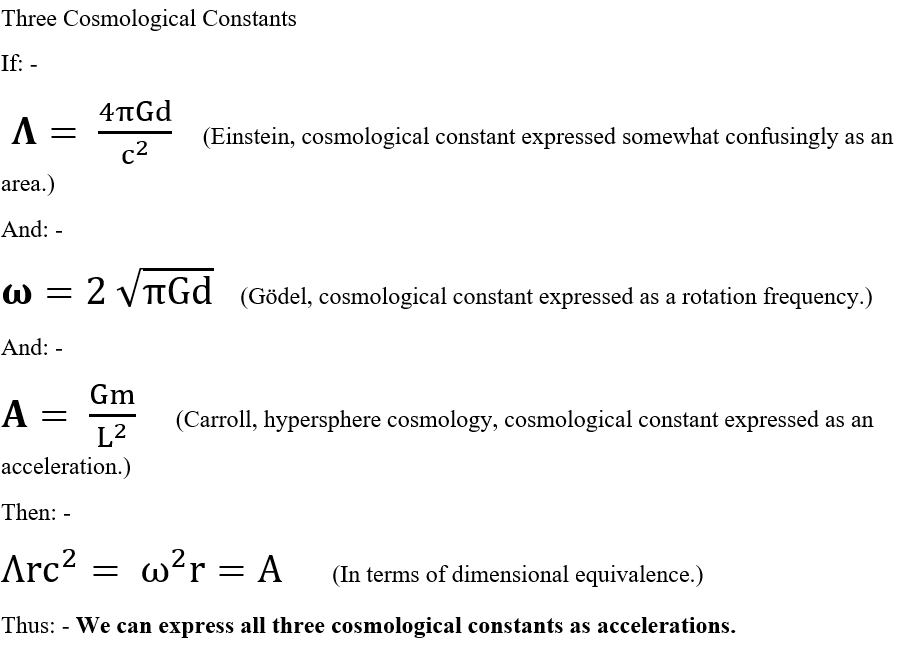 After the discovery of the cosmological redshift, Einstein retracted the cosmological constant that he had devised to stabilise his static hypersphere model of the universe, describing it as his greatest blunder. It does indeed look like a bit of an ad-hoc fudge factor in the form in which he inserted it into his equations. He considered it effectively as a source of anti-gravity of unknown origin that prevented the hypersphere collapsing in on itself. Einstein went over to the expanding universe model, but the recent discovery of a mismatch between supernovae redshifts and apparent magnitudes has led to the idea of dark energy driving an accelerating expansion of the universe which implies a resuscitation of the idea of a cosmological constant, some have opined that his ‘greatest blunder’ lay in abandoning his original idea.

Gödel attempted to stabilise the Einsteinian hypersphere by having it rotate. His cosmological constant appears as an angular velocity. However, as no axis of rotation seemed observable this solution also fell into disuse and obscurity.

The Hypersphere Cosmology model also arises from the original Einsteinian and Gödelian models but it looks further into the geometric properties of hyperspheres which have an intrinsic form of rotation (vorticitation) with no observable axes and which give rise to a type of cosmological constant expressed as a negative acceleration A, that stabilises the hypersphere at constant size, redshifts light on cosmological scales, increases the orbital velocity of rotating galaxies, and lenses the light from distant supernovae distorting their apparent magnitudes.

Intriguingly, all three cosmological constants exhibit a stunning equivalence as the final equation in the above shows.

I have finally abandoned all doubt about the reality of Global Warming. After our bizarre spring and summer my three Autumnal Mandrakes woke up and sprouted at the autumn equinox rather than wait for Samhain as customary. So many other plants have seeded prematurely that the squirrels and birds have hardly bothered with the bird feeders.

Soon an eight-foot votive pillar to Cuda the Celtic Goddess of the Cotswolds (Cudaswolds?) will appear in the gardens. Her popularity amongst neo-pagans has shot up in this part of the world since the discovery of a Romano British plaque, apparently to Her, near the local Celtic capital of Cirencester. However, the Prof informs me that the whole modern myth derives from the recent very imaginative and questionable work of the amateur archaeologist Stephen Yeates and that it all looks like a splendid example of Chaos Magic. Deities ‘R Us!

The shitstorm of conflicting opinions, passions, and predictions about Brexit continues and the questions about the competence and integrity of all our politicians mount.

Nevertheless, let us never forget that the British voted in favour of deciding on their own response to globalisation and immigration rather than accepting the diktats of others that they did not elect on these matters – whatever the economic costs or benefits.

The EU surreptitiously mutated from an economic into a political project. Any new vote to remain would effectively mean a vote to deprive ourselves of the right to ever vote again on anything important. The British Parliament would become as much of a sham as the European ‘Parliament’.