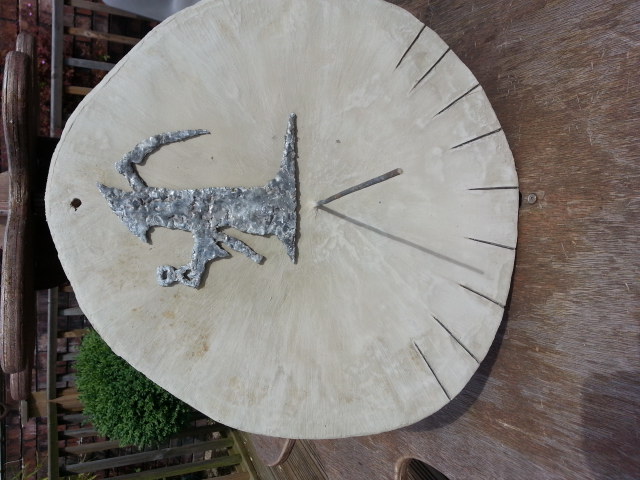 Herewith a midsummer sculpture for the gardens, a vertical sundial calibrated in situ for a south facing wall.  Turdcrete over steel wire with a figure of Time/The Grim Reaper done in plumber’s tin solder with blowtorch and soldering iron. Photographed on Solstic morning, and hour and a half before Midday GMT and subsequent mounting high on wall. Sorry photo on side.

Provisionally titled ‘Life’s too Short to be an Asshole’.

On Arcanorium College the Apophenia 2 course winds down after Her birthday in May and we examine the inspirations received.

Currently we discuss Lionel Snell’s book ‘My Years of Magical Thinking’, probably the most deep and profound work of Magical Philosophy ever published, alongside Matthew Hutson’s ‘The Seven Laws of Magical Thinking’ a rather slimmer and more populist book for civilians which nevertheless raises some interesting questions.

A new course/extended discussion and practical on the topic of EXPERIMENTAL BELIEF may follow shortly.

The Standard Model (Lambda CDM) of Cosmology posits a big bang and states that the nature of reality prior to this ‘is’ unknowable and beyond the bounds of scientific inquiry.

The Standard Copenhagen Interpretation of Quantum Physics states that the nature of the underlying reality ‘is’ unknowable and beyond the bounds of scientific inquiry.

What a come on! Surely, as wizards we can do better than this.

I suspect that in both cases orthodox science has made some erroneous assumptions about Time.

In the cosmological domain the redshift in the wavelength of light from distant galaxies became misinterpreted as an expansion of space, and manifold nonsense has resulted, such as cosmic singularity, cosmic inflation, big bang, dark matter and dark energy - all forms of phlogiston required to patch up the discrepancies between the resulting mistaken theory and actual observations.

If instead theorists had concentrated on the frequency of cosmic light they might have modelled the decrease of frequency (Time rather than length) with cosmic distance in terms of a deceleration arsing from a small positive spacetime curvature A.

This formula accounts for observed redshifts ((by frequency, (or wavelength if inverted)) without recourse to the hypothesis of a big bang and expanding universe and all the infinities and inconsistencies that this leads to.

In the quantum domain the standard assumption of unidirectional one-dimensional time renders the underlying reality inexplicable. Cramer’s Transactional Interpretation does however show how reversible time can explain interference patterns and entanglement.

All the basic equations of physics except for the second law of thermodynamics exhibit a potential time reversibility yet we do not often observe it simply because two-body collisions remain much more likely than three-body collisions and collisions involving even more bodies than that become fantastically unlikely, so stuff basically tends to break, and entropy creates an apparent arrow to time.

The curious wave-particle duality of both energy and matter quanta makes very little sense in a 3D space and 1D time manifold.

However, the transverse wave behaviour of quanta becomes easier to understand if we model it as a rotation of an otherwise unobserved vector that lies in a plane orthogonal to time as we measure it. If a plane of ‘imaginary’ time lies orthogonal to measured time it can account for various of the wavelike features of quanta, quantum superposition, and the apparent probabilistic and indeterminate behaviour of quanta. Imaginary time would act as a kind of pseudospace out of which particle like behaviour decoheres at measurement/wave function collapse.

A symmetrical hyperspherical 3D Time – 3D Space manifold might well explain the deep physics of this universe, and some of the curious phenomena of magic as well.