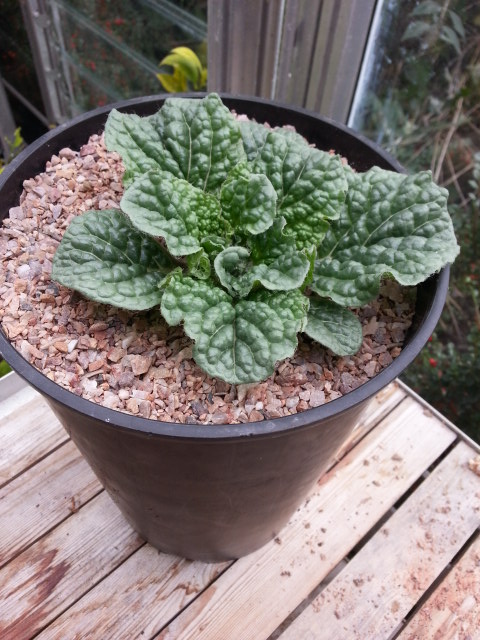 The three Mandrakes (Mandragora Autumnalis) have exploded into leaf with great enthusiasm in just a week, herewith a picture of the one called Milady, as under the soil she sits with the thighs of her two main roots elegantly crossed.

I do not intend to eat her, when she gets old enough I hope to open a conversation with her.

I have divided my time between horticulture, sculpture (attempting to cast Apophenia in metal, pics to follow when finished), and physical/metaphysical calculations from a Lengian perspective.

Mach’s Principle has hung around on the periphery of our understanding of the universe for 100 years. Qualitatively stated it says that the inertia of any mass arises somehow from the presence of EVERYTHING in the entire universe. It sounds intuitively physically right and metaphysically holistic.

Yet nobody seems to have managed to formulate it quantitatively and mathematically so far.

The dominant Lambda-CDM cosmological model appears as the main problem, if we interpret the cosmological data to mean an expanding universe then the ratio of inertial to gravitational mass seems likely to have varied with time, yet cosmological observations of the deep past seem to rule this out.

However, within Hypersphere Cosmology, (an alternative interpretation of the cosmological data that we have), Mach’s Principle becomes relatively easy to quantify with a simple equation.

Together with some further thoughts upon the nature of time and space.

Unknown Knowns – perhaps what you get when you start talking to Mandrakes, Apophenia, and Yog-Sothoth.

Addendum 9/10/17, on further musing this begins to look like a complete armageddon equation for both the standard models of cosmology and particle physics; because not only does it get rid of such pesky theoretical artifacts such as an intial singularity, inflation, dark matter, and dark energy, but it also seems to get rid of the dubious idea of virtual bosons, and the Higgs Mechanism, so that miniscule blip on the di-photon channel at 125 GeV probably doesn't mean a Higgs Boson at all if (inertial) mass arises by the mechanism the equation indicates.