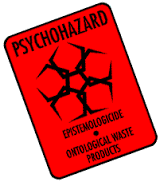 Discordianism seemed a major influence amongst the people I worked with from the mid-nineteen seventies till the mid- nineteen nineties and it still seems to have a big appeal for some Chaos magicians, but what at one time seemed a source of liberation, inspiration and innovation seems to have subsequently developed into a serious flaw.

We used a bit of Discordianism when it seemed fashionable in the early days but it got out of hand later. I think our misunderstanding of it led to a lot of problems. Discordianism does two things. Firstly and mainly it pokes sacrilegious and in-defferent fun at religions and power structures. Secondly it allows a group to poke a bit of fun at itself and to make light of its own pretensions. Unfortunately the second facility of self-parody eventually proved self-destructive.

A little self-parody can give a ritual or a hierarchy a bit of an edge, but an excess of it will undermine both eventually.

The Discordian approach led to people styling themselves things like Sorror Preposterous, groups called things like Temple Misanthropy, me getting called His Pestilence Pope Pete The First of the Zero Degree, Banishing by laughter, and spoof, surrealist, and neo-Dadaist rituals like the Eris Rite which invoked bizarre and unpredictable consequences.

To do this it exploits ‘Camp’ and ‘Transgressive’ themes, both by using them to parody what it seeks to provoke in-deference to, and also by using such themes to establish its own alternative subcultural cult, or in-group, or fashion as ‘A joke masquerading as a religion or a religion masquerading as a joke’.

‘Camp’ means useless or ineffectual in a way that seems vaguely humorous or self-parodying. A Goddess who provokes creative disorder may have some value, but invoking a Goddess who merely screws things up, like Pratchett’s ‘Anoia’, seems either a parody of religion or an invocation of useless ineffectuality, or worse; an excuse for it.

Chaos magic already had a fairly ‘Transgressive’ attitude to organised religions and towards Thelema and Crowleyanity, and it partly defined itself by its opposition to these things. In adopting the god-form of Baphomet it had followed Eliphas Levi’s blasphemous conception of a supreme deity. However transgression easily goes stale, particularly among the converted for who it becomes merely a tired in-joke, and it can descend into little more than a compulsion to annoy outsiders.

My Liber Null & Psychonaut and Liber Kaos included many antinomian themes but little or no Discordianism. However Discordian practices had gradually tended to come to the fore amongst the groups I worked with and probably contributed much to the problems that developed. These days I have ceased to recommend experimentation with the Eris Rite.

The book Psybermagick that I wrote in the middle of my career whilst on extended sabbatical seems the most heavily influenced by the Discordian perspective, although it also contained the seeds of later research in other directions.

My last three books, The Apophenion, The Octavo, and The Epoch contain only minor references and appendices about Discordianism, as Apophenia began to assume far more importance for me than Eris.

Discordianism basically served to attack the old aeon paradigms. I think we should avoid it as a model for the coming Pandaemonaeon.

Discordianism seems dead or dying, having served its purpose. Any new serious currents and orders seem unlikely to use it again.