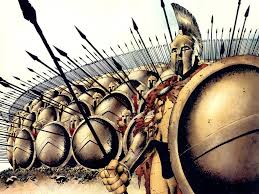 The people who invented Democracy in the first place have just set us all a brave example in saying NO! to the EU-Synarchy.

Let us hope and conjure that this Thermopylae moment marks the beginning of the end of the whole rotten corrupt undemocratic EU through which the Germans have, for a third time, attempted to establish hegemony for their own benefit.

I used to really enjoy holidaying in Greece before it entered the Euro. After that it rapidly became rather expensive to do so. Taverna meals which used to cost about the same as English pub lunches suddenly cost as much as German restaurants.

I do not think the Greece should feel any shame or embarrassment about it debt, after all its creditors shoveled money at it in a greedy attempt to gain profit and control.

If Greece declares itself bankrupt and defaults and reissues its own currency and starts again it will experience temporary hardships caused by lack of imports, however it will quickly recover due to a tourist boom and an export boom.

Instead of technically defaulting it could recreate the Drachma at 1:1 with the Euro, and pay off all its debts instantly before allowing any other use of the Drachma, and then either deliberately devalue it or let it quickly find its realistic exchange rate at maybe 10:1. In effect the Greece would have played back in reverse the trick the EU played on it.

Any other strategy looks like penury and servitude to German financiers forever,