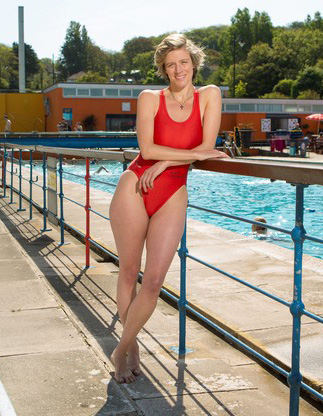 With some exhuberance I post a picture of my victorious MP. Unlike a lot of them she once had a real job, as you can see from her magnificent lifeguard's shoulders.

I felt no need to actually vote for her or to sit up for the foregone conclusion of a result.  The Sun and the bookies as usual called it right. The bookies had them neck and neck towards the finish, but bear in mind they offer odds based partly on their appraisal of the chances but partly on the money that actually gets placed, so you have to allow for the sort of people who actually go to the bookies, sample bias as we mathematicians call it.

So we have a sensible result for the UK, despite the simmering tartan romanticism north of the border, and we have avoided the dread Lab/SNP coalition of entropy.

I voted Green as promised in my electoral Pact with my eldest, a magical gesture for the future.

And now for a little light physics: -

Fifteen Old, Massive Galaxies Found in the Early Universe --"They Shouldn't Even Exist"

A young galaxy in the local universe?

The nearby dwarf galaxy DDO 68 – only 39 million light-years away – looks young. But its nearness to us in space suggests it’s not as young as it looks.

Hypersphere Cosmology confidently predicts that astronomers will eventually discover galaxies of all ages at all distances, bright new ones are just easier to find at extreme distances. The Universe recycles everything.