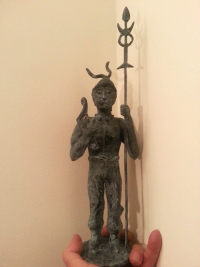 Herewith Lugh, one of a series of Celtic Gods associated with my area as the pan-celtic god Lugus and his welsh counterpart Lleu.

In the recorded Irish myths he appears as the thinking man's superhero - a wright, a smith, a champion, swordsman, a harpist, a hero, a poet and historian, a craftsman and a sorcerer.

Anything you can do Lugh can do better - as the Prof has quipped.

In this faux first century bronze (rendered in metal and milliput) I've depicted him with a mercurial style magic spear (the Romans equated him with their Mercury) and a slingshot at his belt and a harp for his atributes in the Irish myths. 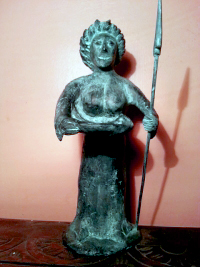 As no tenured academic seems to want to risk career suicide by endorsing the following scientific paper for journal publication I release it here into the public domain for free use.

It's located on the Hypersphere Cosmology section of this site.

Unfortunately its radical conclusions may invalidate the current work of some 20,000 or so theorists, however it will give them plenty to do with the rest of their time.

Perhaps doubly unfortunately this all comes from an old style Natural Philosopher and Wizard, but don't let that inhibit your rigorous investigation of the maths and physical principles that it implies.

And on a lighter note see my impression of Sulis, Goddess of the hot springs at Bath, 1st century romano-celtic bronze in the neo-barbaric style :) actually rendered in milliput and steel wire framed, black lacquered and verdigrissed, I hope they like it at Grove. Impression of Lugh to follow. 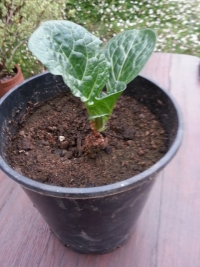 Autumn Equinox and my three Mandrakes have again sprouted leaves after a dormant summer; I guess I must have the Autumnalis variety. They certainly take their time; I may just get some flowers and seeds this year. Milady, the largest one who looks like she reclines cross-legged on a couch, has achieved the size of a modest parsnip in 3 years. My cunning plan to re-seed all the hedgerows of southwest Albion with the m may take centuries.

Walking over the peaks in the north of the Lake District earlier in the week I could see Scotland and wondered if I would ever see it again.

But Scotland just said YES to common sense, despite the juvenile element to the vote. The canny Scots will get devolution and even more of our money and they will retain British citizenship, and I won’t have to send food parcels to my eldest in the highlands.

Cameron will probably get re-elected now, and hopefully buoyed by his success he will grant us all a referendum on the EU……. and loose it.

Divorcing Britain to get closer into bed with the damned EU always looked like the Achilles heel of the argument for Scottish Independence.

The Wizardry section of this site now contains a new piece called The Neoplatonic Chocolate Screwdriver. Ever since I picked up my first books on magic and esoterics forty years ago I’ve had issues with certain dubious parts of the corpus like astrology and the essences of the elements. My experiences of Neo-Druidry have served to crystallise my thoughts on the subject further, I love the overall ambience of Druidry but the Neoplatonism in it leaves me cold.

Scotland, bonnie Scotland, adopted home of my firstborn. Please take the new Devo Max option and vote No to the foolish romantic notion of a hasty divorce in favour of that damned European Union. Stay and we can go Independent together.

If the hotheads of the Yes campaign loose expect a few brawls and some vandalism, but if they win expect massive disinvestment and refugees migrating south.

Hypersphere Cosmologyachieves 150 thousand+ hits from all over the planet!

Do keep me informed of your debates with the timid tenured guardians of cosmological orthodoxy, I hope to outlive the big bang theory.

Oops, well at least it’s useful to know just how high they set the bar these days.

I shall nevertheless remain a Bard and continue at Grove, and with my studies, differences of opinion over Neoplatonist metaphysics notwithstanding.

Insanesburys. Sandwich and a juice? That’s £4.19 Sir, mind you, if you have a packet of crisps with it, it will only cost you £3. Okay thanks mate, ring in a notional packet of crisps as well then. Sorry Sir, but you will actually have to take the crisps as well; shall I get them for you? Err thanks, do you fancy them yourself. Sorry Sir but I’m not allowed to accept them. No wonder we have an obesity crisis, even amongst the pigeons in the park.

On Saturday night I attended with friends the open-air Robert Plant concert at Glastonbury Abbey. This event seemed a thousand miles away from the big annual Glastonbury pop festival, no mud, few twentysomethings, mainly nine thousand senior folk with their own portable chairs, picnic tables, hampers and champers, and sometimes their kids.

The Maestro gave a spellbinding performance, the elder god of rock looks like Odin now but he still sings like Apollo. He covered a number of old Led Zeppelin songs but gave them all an upgrade with fresh twists and subtleties and some new ethnic inputs from his band which included a very talented guy from the Cameroons. By the end of it he had all of us oldies up out of our portable chairs.  A master of his craft finessing his career.

I note that the Hypersphere Cosmology in a Nutshell paper here has already notched up eighty thousand reads. A new more powerful equation has replaced the redshift equation given in The Octavo. Either the world’s physicists must have started passing the joke around to all their mates or they have started scribbling furiously on their blackboards.

I suspect that the flurry of interest may have arisen because of the ‘axis of evil’ that the WMAP probe recently revealed as an embarrassing anisotropy in the cosmic microwave background radiation could bear interpretation as some sort of rotation of the entire universe.

To forestall the possible headline ‘Mad Occultist Cracks Secret of Universe’ I’m redefining myself as a Natural Philosopher. Natural Philosophy was what we used to have before science and magic parted company after Newton. Somewhat paradoxically Newton himself researched alchemy and esoterics and science and maths with equal vigour, but we only tend to remember the old sorcerer-scientist for his science and maths. Me, I like to look at the bigger picture too.

So I’ve decided to try and pass the Bardic Review and apply to become an Ovate.

Eurosceptic parties of the left and of the right have made a good showing at the elections for the sham ‘EU Parliament’, and UKIP have done exceptionally well in the UK. The response from the unelected EU commission and the Germans appears to consist of: - ‘we will make a pretence of listening to the protest but we will basically ignore it and hope that it will go away when the economy improves’. The ‘ever closer union’ faction of the euro political class remains in power but the tide has started to turn.

The EU economy seems unlikely to ever improve now because energy and raw materials become ever more scarce and expensive, and dynamic emerging economies with cheap labour look set to dominate future markets. An over regulated synarchist managed, undemocratic and creatively inhibited europe hamstrung by political correctness and gigantic social security bills seems set for decline. The EU will reap a hurricane of revolt next time if it continues to ignore calls for a complete rethink of its function or for its dissolution. UKIP has done the British a huge favour by providing a Eurosceptic alternative to the BNP, the French eurosceptics had little alternative but to vote for the National Front.

UKIP’s triumph seems a fitting kick in the teeth for the Guardian reading classes and the illiberal dimocrats. The party of little more than ‘neither of the above’ has become trounced by a party with serious alternatives. (It just seems a pity to me that UKIP’s environmental policies seem very poorly scientifically informed.)

The widespread attempt to accuse UKIP of racism has backfired spectacularly. Whilst the party (like any other) probably does include some individuals with such opinions, its general stance appears Culturalist rather than racist. Most Brits don’t feel too bothered about skin colour but they do object to militant multiculturalism and believe that some cultures have stupid and ineffectual ideas and inhumane value systems.

Since the sixteenth century the foreign policy of the British has centred upon denying anyone hegemony in Europe. Thus they fought the Spanish, the French, and the Germans for centuries and then opposed the Russians throughout the cold war simply to prevent anyone dominating continental Europe. The strength of Europe lies in its diversity and the ability of its various separate nations to try experiments with different approaches. Britain reinvented democracy and taught it to the world, now it must struggle again to prevent Europe descending into an undemocratic Soviet or modern Chinese style hegemony led by an unelected and unaccountable synarchy of the  political classes hiding behind a vast faceless bureaucracy.

I do hope the Scots see sense before their independence referendum. If they want more independence then trying to throw their lot in with the EU will have exactly the opposite effect. They would do better to negotiate more independence for themselves within a UK free of the EU. Tartan romanticism would eventually become heavily regulated by the EU you know, expect 5,000 pages on the health and safety and political correctness of kilts and sporrans and bagpipes, and you can forget about those sock dirks.

The basic Platonic-Pagan-Monotheist paradigm which has dominated esoterics since the first centuries of the first millennium until quite recent times has finally met its fully formed nemesis and replacement in the Quantum-Neo-Pagan paradigm. The new map of esoteric reality looks disturbing and challenging………. and strangely beautiful.

Published in Blog
Tagged under
Read more...
Page 13 of 13
feed