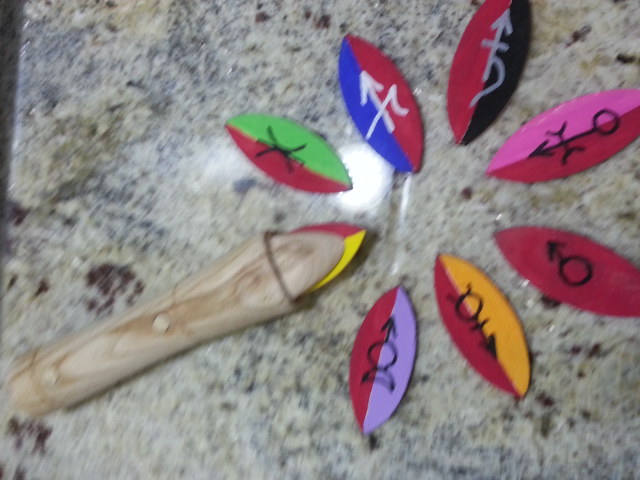 I have become a grandfather for the first time, with my eldest daughter and her husband creating a delightful daughter a couple of weeks ago, mother, baby, and husband all doing fine. As my eldest has become an SNP convert in her adopted homeland, my granddaughter bears a suitably grand Scots-Norse name.

And now to technical advances in esoterics: The picture shows the new Epoch Planetary Pocket Wand, currently loaded with the Horus Lamen, plus the other Martial Lamens for Athena, Choronzon, Thor, Mars, Eris, Loki, and Ishtar arraigned around it as we conduct a series of invigorating Martial workings for January in Arcanorium College. The whole set of Planetary and Bi-planetary Lamens consist of plywood carpentry biscuits pointed up and painted and ensigilised. The Lamens serve both as wand loads and as movable symbols for use on an Astronomicon board.

Wizards often tend to fashion and to discard wands, both Longstaffs and pocket sized Purbas, throughout their careers, both to assist practice and to mark the development of their ideas. This one probably qualifies as about my Mk 11 Purba, although in some sense it also qualifies as Marques 11 – 47 all in one go, due to its versatility. Carrying a pocket wand began as an exercise in Chaos Monasticism, but it has become a constant practise, reminding the wizard that the calling, the duty, and the opportunity, remain ever present.

The festive and birthday period brought this remarkable book: -

Most religions have something running from unease to downright rejection towards the Theory of Evolution, but perhaps much more than the simple inconsistencies between scriptural depictions and scientific ideas about the origin of species underlies this.

The book traces the origins and survival of many of the religious and mystical ideas from India through the Middle East to Europe. As most serious scholars have understood for decades now, religions get cobbled together from the memes of previous religions, they don’t spring miraculously into existence out of nothing, and having cobbled themselves together from fragments they continue to evolve and develop, whilst pretending that they haven’t.

Zoroastrianism, the religion of the Persian Empire, went into decline, although it still has a tiny following.  However Judaism seems to have adopted some Zoroastrian ideas fairly early on in its development and these later fed into Christianity. The Pythagorean philosophies from classical times continue to influence some minority sects in the Middle East. Mithraism has left at least one very distinctive and surprising mark on European culture. (I won’t spoil it for you, read the book.)

Emotive Religion. Theology looks like the attempt to psychoanalyse Deities from the characteristics they display in scripture and in lore and perhaps in ‘revelation’. We try to second guess or interpret their supposed wishes by such activity, usually to some sort of advantage to ourselves.

Mythology and the History of Religion tend to tell us more about how our human psychology expresses itself in various situations than about the Deities themselves.

Theurgy describes the attempts of magicians to call, conjure, and even coerce, various spirits and deities, on the assumption that such phenomena have some sort of independent metaphysical reality. It seems like an extreme extension of prayer.

Theometry on the other hand implies taking the measure of Deities, including noting how our projections of them has evolved, and also making them to order, on the assumption that such phenomena arise from our own psychology and may also serve as vehicles for liberating our more unusual abilities. This seems more like proper magic.

Rational argument has only a limited role in establishing or destroying faith in Deities. Emotive and peer pressure forces have a far greater effect, and all religions employ both although the emotive hooks used by religions or sects within religions can change and evolve with time.

A previous blog discusses the emotive tone of what Richard Dawkins called ‘The World’s Second Worst Religion’ the one that has relied heavily on ‘Guilt and Self-Righteousness’ duality: -

That perhaps now shows signs of improvement under a new Pontiff.

However  if you tried to devise the most ghastly and most destructive possible emotive tone for a religion or sect, then a duality of ‘Self-Pity and Mercilessness’ would fit the specification perfectly and result in The World’s Worst Religion.

Robo-Stogie. The benefits of nicotine seem substantial. Chain-smoking through self-administered Mensa IQ tests seems to add ten percent to my score. Nicotine also gives you at least a couple of yards advantage in an emergency brake whilst driving. (Although for reasons of absent mindedness, apophenia, impulsiveness, ecology, and a preference for exercise, I have always declined to drive.) Nevertheless after fifty years of tobacco enjoyment my dentist said it wasn’t doing my teeth any good, so I went over to Vapes. These seem absolutely brill, cheap to run, thousands of exotic flavours to choose from, no danger of setting your bed on fire, little sign of use or offense to others if you don’t exhale quickly, and probably no personal or collateral damage, assuming that propylene glycol remains as harmless as it seems.

Many thanks for all the emails appreciative of the neo-classical statuary. The next project may consist of designing some ornate bronze rams for the prows of our Trident nuclear submarines. Comrade Commissar Corbyn has come up with the cunning wheeze of disarming them but keeping them to create employment. So if they cannot carry effective weapon systems they should at least carry aesthetically pleasing ones, in a Corinthian or Athenian style perhaps?