The following thought experiment shows that in principle instantaneous communication remains possible over any distance, including interstellar and intergalactic distance; and further that this need not lead to paradoxes or causality violations in a universe with finite a lightspeed; and further that something akin to a cosmic internet probably already exists.

Consider what a delayed choice quantum eraser can do: - 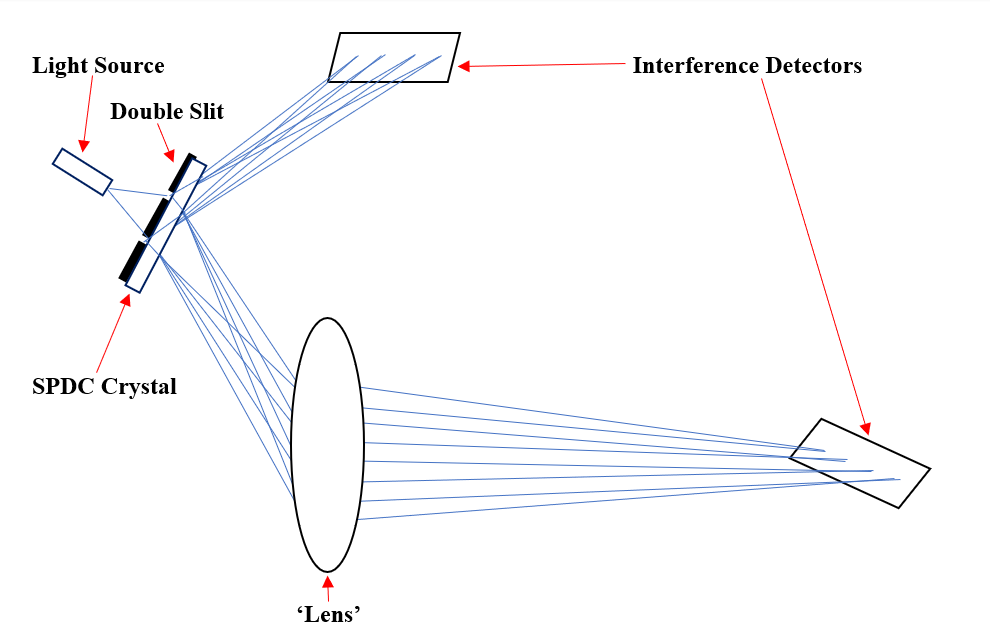 Light from the Source passes through a Double Slit. The Spontaneous Parametric Down Converter Crystal splits each quantum of light into two Entangled quanta, each of half the energy of the original, and these quanta follow divergent paths.

Simply turning one of the Interference Detectors on and then off will cause the other detector to show an on and then an off signal and thus the whole arrangement can transmit binary code instantaneously over any distance.

This need not lead to paradoxes or causality violations in a universe with finite a lightspeed.

However, if either A or B detects Ansible light from the other and decides to modulate its reception by alternately directing it into an interference detector and not doing so, then the other will notice a signal at the time at which they sent the Ansible light.

Thus, it can appear as if each party sends a signal back into the past, but the ‘past’ to which they send it lies a hundred light years away in space, so the space and time cancel each other out.

In practise if two alien civilisations, separated by a hundred light years, simultaneously came up with the idea of Ansibles and both guessed the same most likely frequencies to use, then they could both start exchanging binary code immediately. They would not have to wait for a hundred years for the Ansible light to pass between them.

According to  the current standard cosmology, life has had over ten billion years to develop in the universe. According to Hypersphere Cosmology it has had unlimited time. In the first case a universe wide Ansible network probably already exists, in the second case it almost certainly does.

We just need to hack into it and decode it. That, rather than the discovery of Faster Than Light drive, may constitute the real entry requirement to interstellar society.