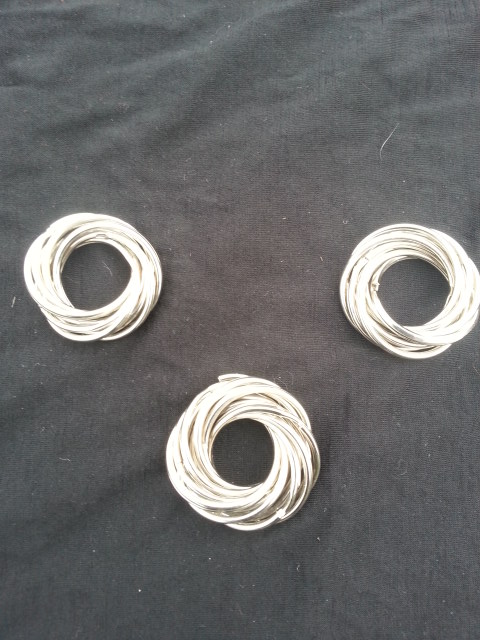 After buying up the entire split keyring stock of the local hardware shop and breaking several fingernails before turning to pliers I managed to make a selection of Hopf Fibration models. This instructive and aesthetically pleasing excercise creates a three dimensional representation of the four dimensional hypersphere and supplies an intuitively useful topological model of the simplest hypersphere, (the 3-sphere or 4-ball). Topologically we can consider a hypersphere to consist of an unlimited number of circles which all link with every other circle. If I had kept going and added a much larger number of rings these fibrations would have formed increasingly spherical objects, however the finite thickness of the split rings used makes this increasingly difficult in practise. Note that two forms of the fibration exist, the top left one and the lower larger one both exhibit a left hand twist whilst the upper right one has a right hand twist. The topology of this universe almost certainly corresponds to the left hand version as this universe exhibits a fair bit of assymetry towards the left at various scales and the simplest fundamental particles within it, the neutrinos, all come in left handed versions only (antineutrinos all exhibit right handedness only, but they represent particles going backwards around the fibrations)

The Vorticitation of the Hypersphere as posited in Hypersphere Cosmology on this site means that the circles of the fibration represent the TRAJECTORIES of  material 'orbiting' within the hypersphere, and material here means everything from galaxies to light and other radiation 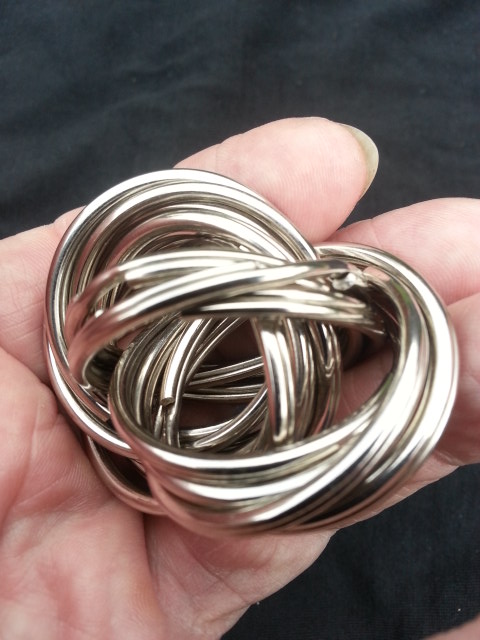 Now although a fibration with just a limited number of circles will tend to fall into a torus when placed on a flat surface the full fibration would look more like a sphere as shown above in which material can 'orbit' around a circle orientated in any plane so long as some part of that orbit lies within the orbit of all the other circles (because of the gravity/spacetime curvature which constrains it). Thus such a hypersphere has no actual centre or edge in 3-dimensional space. An actual gravitational hypersphere corresponding to the size shown here would have to have the mass of a large planet. However because for any hypersphere m/l =c2/G, very large hyperspheres can have a much lower density, indeed our own universe only has about one particle per cubic metre on average, its practically a vacuum, but that proves enough to close it as a hypersphere about 13.8 billion light years across on the 'inside', from the 'outside' it would appear a bit smaller but of course we cannot get outside to see that.

Hyperspheres also seem theoretically possible down at the fundamental particle end of the cosmic scale, below the Planck length, and the currernt reasearch project involves attempting to model the properties of fundamental particles not as dimensionless points but as arising from extreemly small hyperspheres in which fibrations represent spacetime curvatures corresponding to electric, nuclear, and generational 'charges'. 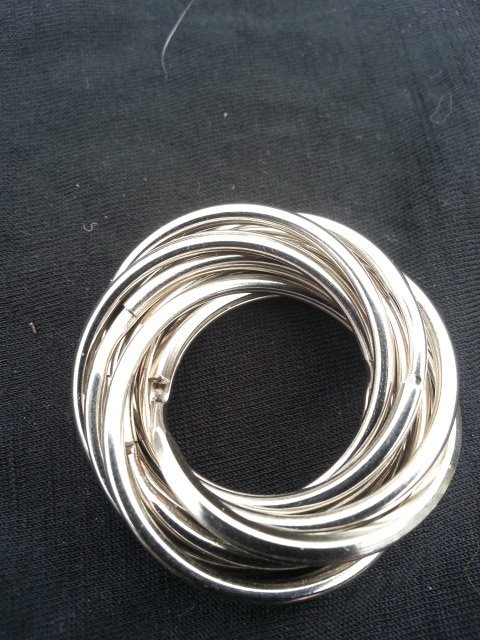 Finally a clearer shot of the larger Hopf Fibration Hypersphere, it struck me as very suggestive of a Druidical(?) Celtic Torc with a single twist in it and the ends soldered together, it serves as such as a pendant on a thong now.